Last year, a 54-year-old Canadian woman had a malignant brain tumor that was blurring her left field of vision and... 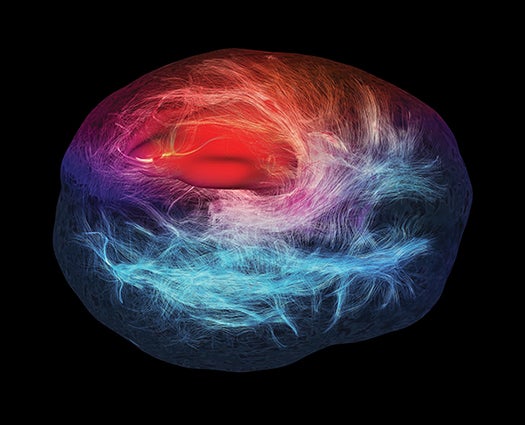 Last year, a 54-year-old Canadian woman had a malignant brain tumor that was blurring her left field of vision and causing severe headaches. It needed to be removed. So David Fortin, a neurosurgeon at the Sherbrooke University Hospital Centre in Quebec, ordered a tractography map from Maxime Chamberland. A computer scientist at the hospital’s imaging center, Chamberland is one of an increasing number of researchers using tractography, a technique that follows water’s movement in the brain to map neuronal connections. Before surgery, he runs 64 3-D MRI scans through a computer program that calculates the direction of water diffusion. (In the map above, neural fibers near the tumor are red and the ones farther away, blue. The tumor itself is solid red.) Knowing how the tumor is interfering with the brain helps Fortin make better judgments about what to cut. Before a typical three- to six-hour operation, Chamberland and Fortin sit at the computer together to plan out the surgery, navigating through the 3-D image to find the angle of attack that best avoids neurons crucial for sight, mobility, and cognition. In the future, Chamberland would like to combine these maps with pre-op functional MRI readings, which can indicate whether neural fibers are healthy or damaged, giving surgeons an even better understanding of which areas to slice before they’ve set foot in the operating room. In this case, Fortin removed more than 95 percent of the patient’s tumor and didn’t cut any critical connections. He has performed 27 surgeries using tractography maps so far.