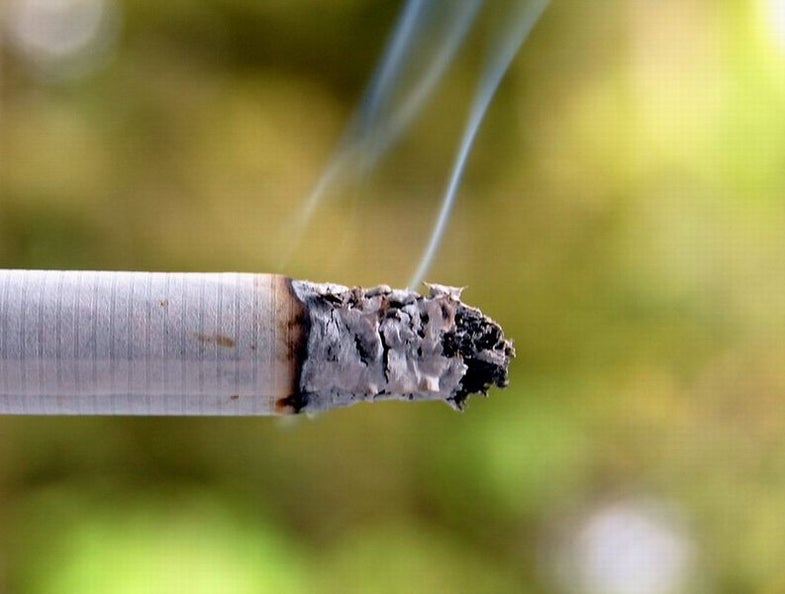 Scientists at Medical University of South Carolina temporarily blunted cigarette cravings among smokers by magnetically stimulating nerve cells in their brains. The procedure, called transcranial magnetic stimulation, is already approved by the FDA to treat depression, though its efficacy is controversial (it’s also been prescribed to stop people from lying and treat adult ADHD.)

In the experiment, researchers randomly assigned 16 smokers to either a 15-minute session of high-frequency transcranial magnetic stimulation (in which coils placed over the forehead send magnetic pulses into the prefrontal cortex), or 15 minutes of sham treatment. The magnetic stimulation isn’t painful and doesn’t require sedation or anesthesia. The scientists told the volunteers not to smoke for two hours prior to the experiment.

Before the treatment, the researchers showed the smokers both neutral images (such as mountain scenes) and images intended to provoke nicotine cravings (such as a person lightning a cigarette.) Then they asked the volunteers to rate how they felt about statements like “I would do almost anything for a cigarette now” and “I am going to smoke as soon as possible.” After the magnetic stimulation, the participants saw similar images and again rated how much they craved a cigarette.

The researchers found that the participants who got the real magnet treatment expressed significantly less desire to smoke at the end of the experiment compared with those who got the fake treatment. In fact, the craving reduction was positively correlated with how nicotine-dependent the volunteer was, meaning that those who smoked the most saw the greatest decrease in cigarette craving after the magnetic stimulation.

The authors of the study note that people trying to quit smoking would need several sessions of transcranial magnetic stimulation per day in order to see longer-lasting reductions in cravings. The paper appears in Biological Psychiatry.