NASA captures blooming marine microorganisms off the coast of France. 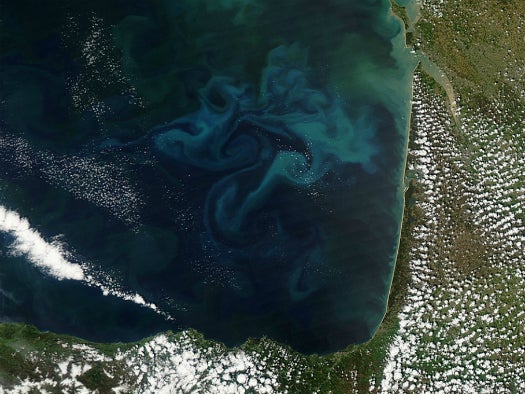 When conditions are just right in the Bay of Biscay, the body of water nestled in the elbow crook between western France and northern Spain, huge blooms of phytoplankton begin to emerge. The marine microorganisms live in the bay all year, but in the spring, the combination of more sunlight, warmer waters and an influx of nutrients carried by ocean currents and freshwater rivers swollen with melted snow creates explosive blooms–those multi-colored swirls in the water.

The massive population explosion is big enough to see from space, and NASA’s Aqua satellite captured this image with the Moderate Resolution Imaging Spectroradiometer (MODIS) earlier this month. The blooms usually die down by May, so this might be one of the last swirly-marine-life photos we get this year.