A Legged Robot That Specializes In Scuttling Across Sand

The math that went into this robot could improve planetary rovers in the future, researchers say. 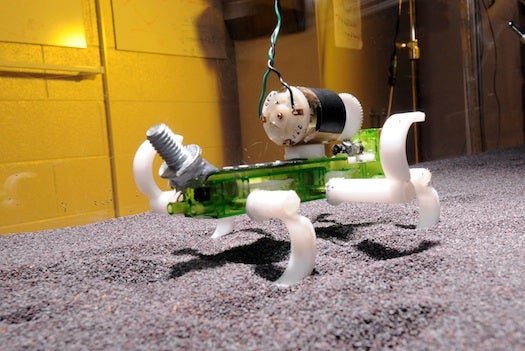 Physicists at the Georgia Institute of Technology have tackled an unusual robot problem: How to walk across sand. There are plenty of mathematical models for how animals and machines move through air and water and over solid ground, the team wrote in a paper they published today in the journal Science. But, they wrote, research is just starting on the math of walking through sand, gravel, or any other “naturally occurring granular media of high sphericity and roundness.”

Considering that sand is pretty common on Earth and other planets, the researchers decided to try to create better equations for beachside locomotion. They both built little legged robots and wrote the equations that describe the interactions between the robots’ legs and different grainy media, including poppy seeds, tiny glass beads and actual sand from the outdoors. The equations could help others improve walking robots and planetary rovers, California Institute of Technology engineer Melany Hunt wrote in an essay in Science.

They also found the most efficient legs for sand-walking bots are C-shaped, with the curve of the C facing forward. The legs are a departure from the tracks that military tanks, construction equipment and other gravel-navigating vehicles have. Tracks have not worked as well as expected for smaller machines, such as Mars rovers, the Georgia Tech physicists wrote. Smaller vehicles’ wheels end up curving the track substantially, reducing the tracks’ performance.

Check out the C-legged robot scuttling its way across sand. Video courtesy of Chen Li, Tingnan Zhang and Daniel Goldman.