Have you seen it at sunset yet? 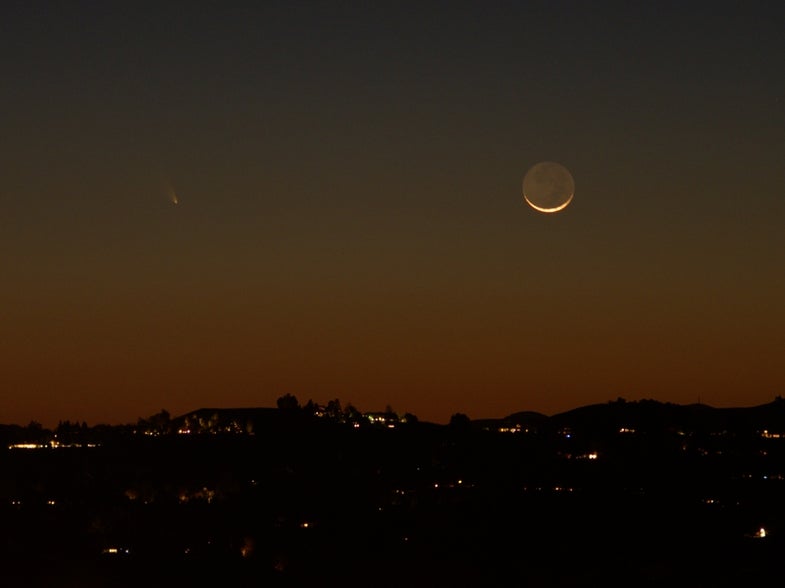 Comet Pan-STARRS is visible in many parts of the U.S. around sunset, and it was at its peak brightness a few days ago when it made its closest pass to the sun. As they approach our star and warm up, dirty cosmic snowballs like Pan-STARRS grow bright tails, or comas, which are made of dust and ice particles that reflect light.

NASA’s Goddard Space Flight Center stitched together some observations from the STEREO observatory, which watches the sun. The comet moved around the star from March 10 through 15 and gradually grew brighter.

In the video, Earth is the unmoving bright spot on the right, and the sun’s light comes from the left. The swirly vapors on the left are coronal mass ejections. While it looks like one CME goes right past Pan-STARRS, it actually wasn’t in the same plane, because the comet’s tail didn’t move as the CME went by.

Pan-STARRS is named for a synchronized wide-field telescope project developed at the University of Hawaii. Since it became operational in 2010, the first telescope in the system has discovered more than 345 near-Earth asteroids (including 29 potentially hazardous ones) and 19 previously unobserved comets—including the project’s namesake. It will be visible in the western sky at dusk for a few more days.