But all that really tells us is that we need more research. 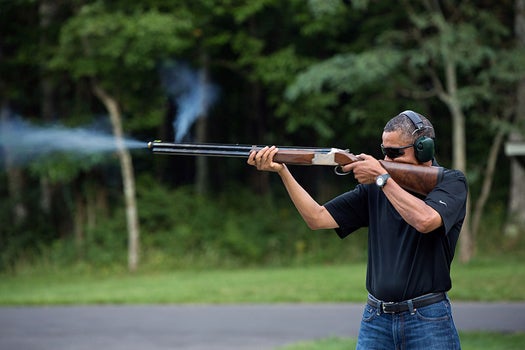 In the wake of some particularly high-profile mass shootings, the national debate over gun control is perhaps more heated than ever. Does gun control actually result in fewer deaths? Or does the solution lie in some other kind of protection?

A study published today in JAMA Internal Medicine found that more firearm laws are in fact associated with fewer firearm deaths, although that may not actually tell us whether one leads to the other.

Researchers from Harvard University and the Boston Children’s Hospital looked at firearm-related fatalities between 2007 and 2010 and compared each state’s rate of firearm fatalities per 100,000 people. They created “legislative strength scores” on a scale of 0 to 28 for each state’s firearm laws, with each law counting as one point. (Gun-loving Utah came in with a score of 0, while Massachusetts had the strongest laws with a score of 24.)

Controlling for various factors like poverty, unemployment, population density and house-hold firearm ownership, the analysis found that a larger number of gun laws in a state was associated with lower rates of both firearm homicides and suicides. However, the researchers didn’t make any ground-breaking pronouncement about the relationship between gun laws and gun violence, warning that the study was “ecological and cross-sectional and could not determine cause-and-effect relationship.”

A 2011 analysis of gun deaths by The Atlantic showed a similar association:

It is also possible that gun laws pass in states where there is already a lot of opposition to guns, and don’t pass where people are predisposed to own guns. As the researchers point out, “High levels of gun ownership might be related to both high rates of firearm deaths and a cultural environment in which it is more difficult for a state to enact strict firearm laws.”

However, scientific examination of the causes of gun violence has been handicapped for years due to federal regulations that prohibited using national science funding to “advocate or promote gun control,” though President Obama called for an expansion of research in his 23 executive actions on gun control in January.

“When rates of firearm violence were at historic highs and appeared to be increasing, the government abandoned its commitment to understanding the problem and devising evidence based solutions,” UC Davis professor Garen Wintemute writes in the invited commentary associated with the study.

Wintemute, the director of the UC Davis Violence Prevention Research Program, points out that this particular study has a few limitations. The legislative scores were based on information from two advocacy groups, The Law Center to Prevent Gun Violence and the Brady Center to Prevent Gun Violence, and did not measure how effectively states might enforce their gun laws or how guns flow between states. The score system hasn’t been validated.

“It is as if the scientists have both hands tied behind their backs,” Wintemute writes. “In fact, that is precisely what has happened—not just to these investigators, who did well with the data available to them, but to firearm violence researchers generally.”