Rare Binary Stars Provide A Better Yardstick For The Cosmos, And Could Help Illuminate Dark Energy

Measuring the distance to cosmic neighbors helps calculate the expansion of the universe as a whole. 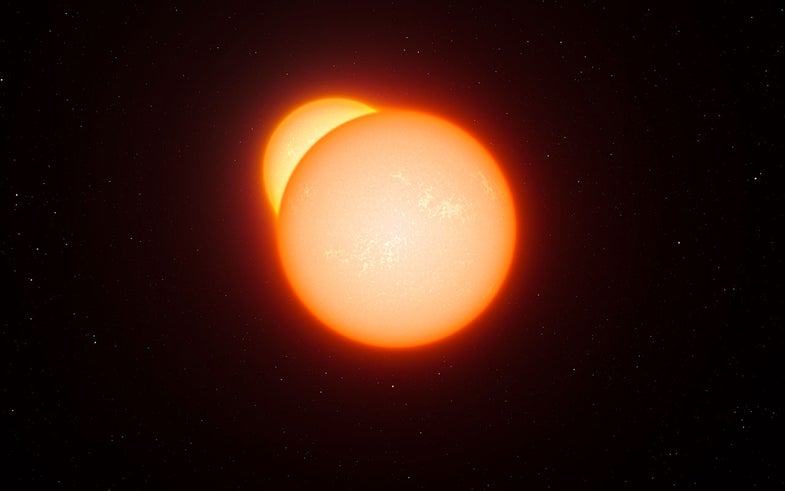 This artist’s impression shows an eclipsing binary star system. As the two stars orbit each other they pass in front of one another and their combined brightness, seen from a distance, decreases. By studying how the light changes, and other properties of the system, astronomers can measure the distances to eclipsing binaries very accurately. A long series of observations of very rare cool eclipsing binaries has now led to the most accurate determination so far of the distance to the Large Magellanic Cloud, a neighbouring galaxy to the Milky Way and crucial step in the determination of distances across the Universe.
SHARE

Something is making the universe expand at an ever-faster rate, and since no one knows what it is or how it works, we call it dark energy. A new super-precise observation of a nearby galaxy could help shed some light on it, however. Astronomers have measured the distance to the Large Magellanic Cloud better than ever, and this is a crucial step in a special calculation called the Hubble constant, which helps scientists figure out how quickly the universe is speeding apart.

To measure the universe, you need to start with a point of reference–a cosmic yardstick, if you will. Astronomers measure the distance to nearby objects, which are dubbed “standard candles,” and use these objects and their brightnesses to measure objects that are farther away. But if the original yardstick is mis-calibrated, then so are the rest of your measurements. The Large Magellanic Cloud is one such standard candle, but its distance from us has been hard to pin down. Astronomers have been trying for more than a century.

Telescopes in Chile, Hawaii and elsewhere around the world observed tight pairs of stars known as eclipsing binaries. (These stars also figure prominently in the Kepler mission, celebrating its planet-hunting anniversary this week.) In an eclipsing binary system, stars orbit a common center of mass, and they eclipse each other as viewed from Earth. When this happens, their combined brightness drops a bit, as one star blocks the other. By tracking their variable brightnesses, and watching how fast they circle each other, scientists can figure out the stars’ size. Combining that with color and other data gives you a remarkably accurate distance measurement.

This new work used 16 years’ worth of observations to construct a newly precise distance to the Large Magellanic Cloud: 163,000 light years away. All told, the new numbers dramatically reduce the inaccuracy of cosmological distance measurements, according to the authors of a new paper describing the work.

“For extragalactic astronomers, the distance to the Large Magellanic Cloud represents a fundamental yardstick with which the whole universe can be measured,” said Fabio Bresolin, an astronomer at the University of Hawaii, in a statement.

And so too can dark energy. Astronomers can now further nail down the number known as the Hubble constant, the rate at which the universe is expanding. This will help them investigate the physical properties of the cause of that accelerated expansion: Dark energy. The paper is published this week in Nature. 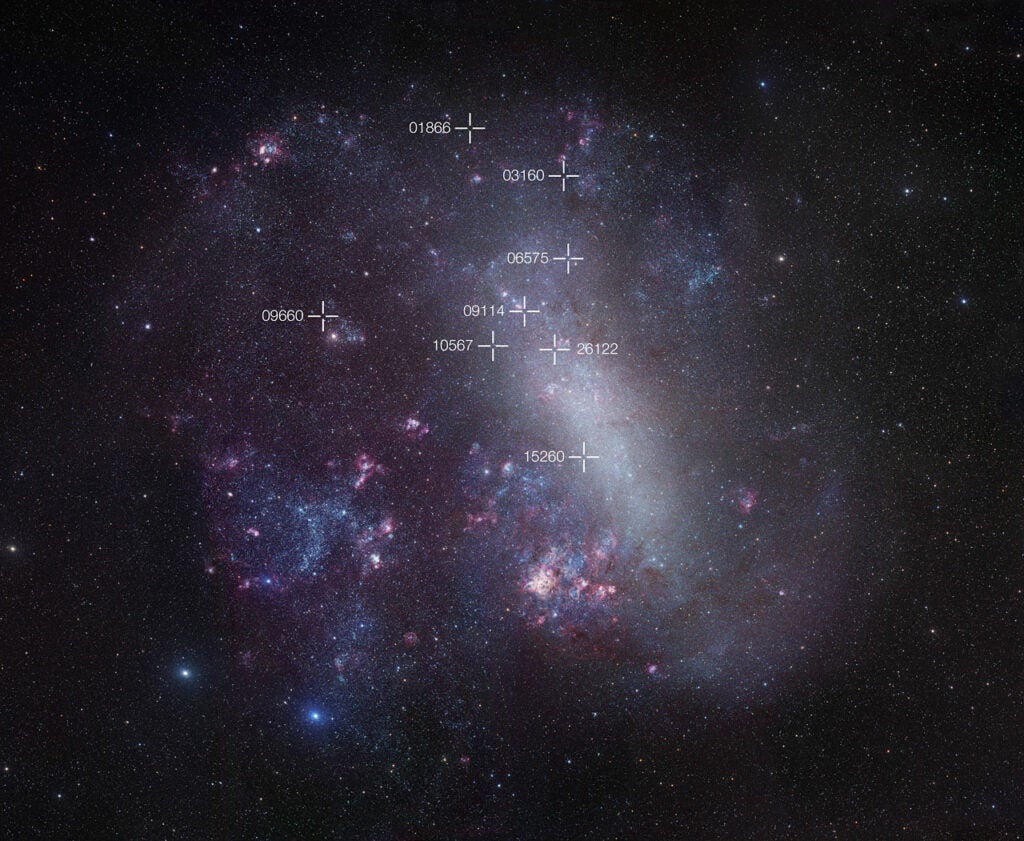 Map of the Large Magellanic Cloud

This photograph shows the Large Magellanic Cloud, a neighboring galaxy to the Milky Way. The positions of eight faint and rare cool eclipsing binary stars are marked with crosses (these objects are too faint to appear directly in this picture). By studying how their light changes, and other properties of these systems, astronomers can measure the distances to eclipsing binaries very accurately.
Chile
dark energy
hubble space telescope
large magellanic cloud
Science