How It Works: The Fastest DNA Sequencer

DNA sequencing has revolutionized medicine and biomedical research. For example, DNA analysis can tell doctors which drug might work best... 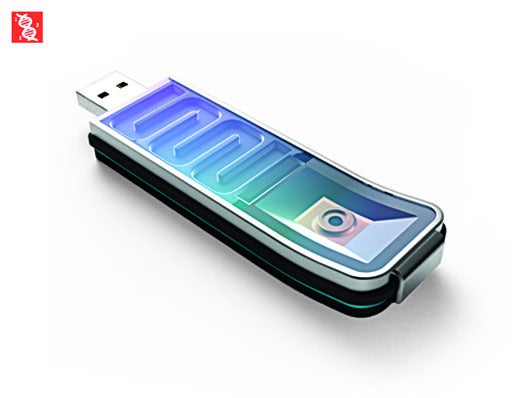 DNA sequencing has revolutionized medicine and biomedical research. For example, DNA analysis can tell doctors which drug might work best against a particular cancer. But current technology usually sequences only short stretches of DNA and can take hours or days.

To sequence anything longer than a few hundred base pairs, scientists mince up thousands of copies of the target DNA, sequence all the fragments, and use software to painstakingly reconstruct the order of the DNA bases by matching overlap within fragments. A new approach, called nanopore sequencing, can handle long strands of DNA at once, eliminating the need for overlap analysis. As a result, nanopore sequencers could be cheaper, faster, and more compact than other DNA sequencers. They can also accurately sequence stretches with many repeating base pairs. The MinION from Oxford Nanopore Technologies connects to a USB port. Soon, anyone with $1,000 and a computer will be able to sequence DNA. 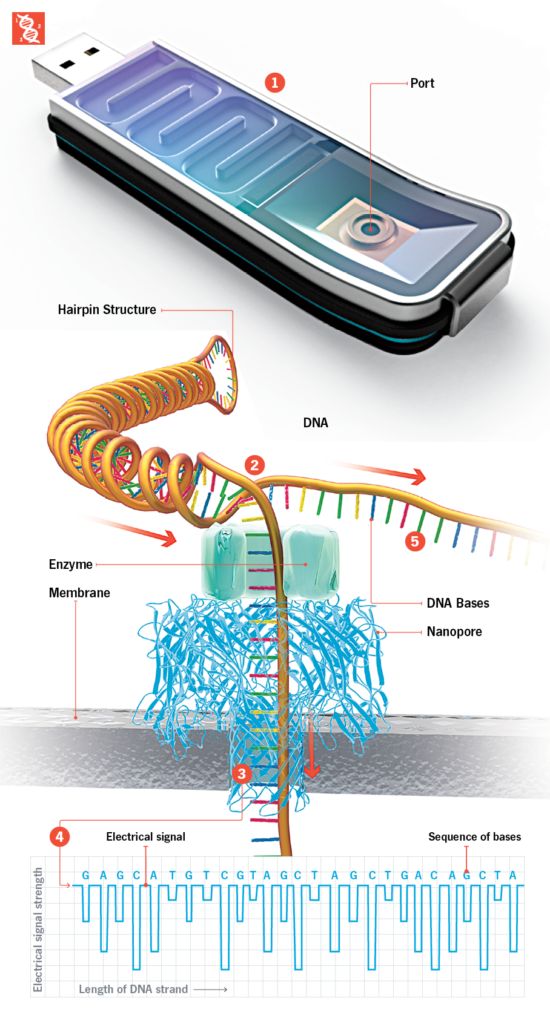 1) Drop the DNA sample on a chip.
Researchers place pretreated samples—blood from a patient or purified DNA, for example—into a small port. Within the device is a silicon chip with many thin membranes studded with tiny pores.

2) Unzip the DNA.
An enzyme shuttles the DNA to the membrane’s nanopore. It then unzips the twin strands of DNA and feeds one end into the pore. The pore is a set of proteins arranged in a ring and derived from bacteria. The inner diameter of the pore is a couple of nanometers wide: 100,000 times thinner than a human hair.

3) Block the ion current.
Electrodes send an ionic current, a flow of ions, through the open nanopore. As a group of a few DNA bases—the As, Ts, Cs, and Gs—threads through the neck of the pore, it blocks the ions and interrupts the current. A sensor records the electrical disturbance.

4) Determine the sequence.
Software in an attached computer analyzes the electrical signal recorded for every group of bases. Because each combination of bases blocks the current in a distinctive fashion, the software can deduce the identity and sequence of the individual bases in the group. As the DNA strand feeds through the pore, the software stitches together the sequence of bases on the entire strand.

5) Check for errors.
The device can determine the sequence of a single strand of DNA, but for greater precision, it can also read the complementary strand. Once the first strand of the DNA ratchets through the pore, a small stretch of DNA called a hairpin structure acts as a tether to draw the matching half into the pore as well.