Fabric coated in DNA from fish sperm won't catch on fire. Who knew? 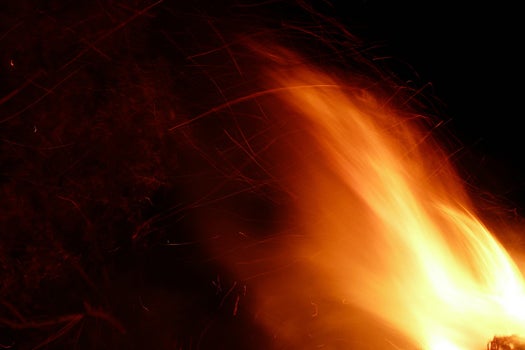 DNA, the genetic Lego castle that makes up all living organisms, can store data, nab bad guys and even appreciate poetry. It can also keep your clothes from catching fire, a group of Italian researchers discovered.

Flame retardants are used in everything from military uniforms to furniture upholstery to children’s pajamas, though some have been found to contain toxic chemicals. DNA could be a green alternative, according to a study in _Journal of Materials Chemistry A.

Scientists dipped cotton fabric in a solution containing DNA taken from herring sperm. Once it dried, they tried to set it on fire. While the untreated cotton burned completely within 80 seconds, the DNA-treated fabric was slow to catch on fire and the flame went out within two seconds.

Wired has a good explanation of how the chemical structure of DNA stops flames:

When heated, its phosphate-containing backbone produces phosphoric acid, which chemically removes water from cotton fibers while leaving behind a flame-resistant, carbon-rich residue. The nitrogen-containing bases release ammonia — which dilutes flammable gases and inhibits combustion reactions — and can act as “blowing agents,” which help turn the carbon-rich deposits into a slow-burning protective layer. Ultimately, these ingredients stop combustion by forming either a carbon-rich foam, or a protective, glassy carbon coating called char.

Watch it in action:

There are a few things standing in the way of DNA-coating as a viable flame retardant. It’s expensive, for one. It also can’t be washed — the solution came off immediately when laundered — which would prove cumbersome for most clothing applications. In the future though, we could all be happily and safely wearing sperm.