Curiosity Finds Evidence That Ancient Mars Could Have Supported Life

A rock analysis shows the necessary components for sustaining life. 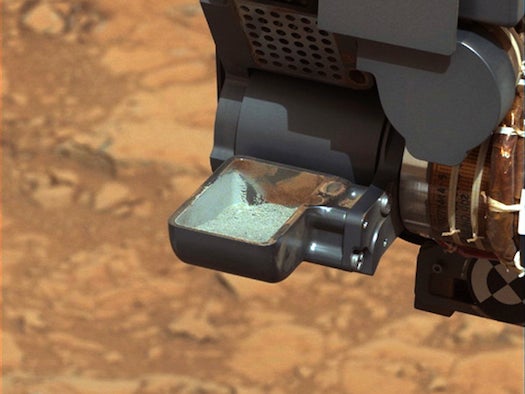 Only a little while after turning itself back on after a glitch stuck it in safe mode, Curiosity’s chemical analysis of rock samples show something amazing: chemical evidence ancient Mars could’ve supported life.

Curiosity used a pair of its instruments, Sample Analysis at Mars (SAM) and Chemistry and Mineralogy (CheMin), to retrieve data on a powdered rock sample dug up last month, and scientists have uncovered chemical signs of life in it: the presence of sulfur, nitrogen, hydrogen, oxygen, phosphorus, and carbon point to a planet that could once keep microbes alive. The sulfates and sulfides, particularly, could’ve been used by tiny organisms as a source of energy, something Earth-bound microbes do, too.

Curiosity has been exploring near an ancient riverbed that scientists already suspected would’ve been ripe to keep life, well, alive. (The sample itself came a few hundred yards away from the stream bed.) The chemical analysis gives that theory a boost. Unlike other parts of Mars, this area wouldn’t have been too harsh for any microbes to survive.

About 20 percent of the sample is made up of clay minerals, which could’ve been formed when water on the Red Planet mixed with minerals. Scientists also found a mixture of oxidized, partly oxidized, and un-oxidized chemicals, which was hinted at back when the sample was first taken and showed a decidedly not-red interior of Mars.

Scientists will be confirming the results by testing another rock sample.