If you wanted better asteroid detection, maybe you should have provided some funding, NASA's chief told Congress. 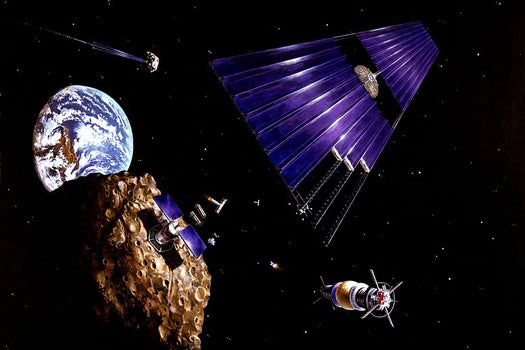 Bolden’s spiritual guidance came as part of a House Science, Space and Technology Committee hearing on U.S. efforts to prevent asteroid and meteor-related catastrophe, one that involved quite a bit of finger-pointing at lawmakers who expect NASA to be able to find a needle in the deep-space haystack before it comes crashing into one of our cities — on a tight budget.

When Republican Representative Bill Posey of Florida asked Bolden what NASA could do to ward off a hypothetical asteroid set to collide with Earth in three weeks’ time, he shot back: “The reason I can’t do anything in the next three weeks is because for decades we have put it off.” Back in February, meteorite researchers told PopSci that with current techniques, the chances of spotting something like Russia’s meteorite in advance are dismal.

The NASA Authorization Act of 2005 stipulated that NASA detect, track and catalog 90 percent of all Near-Earth Objects greater than 140 meters in diameter by 2020. The agency has yet to reach this goal — they’ve only cataloged an estimated 10 percent, although they believe they’ve found 95 percent of objects greater than one kilometer in diameter. (The Russian meteorite was an estimated 17 meters across.)

Bolden reminded the committee that “the probability of any [Near-Earth Object] impacting the Earth anytime in the next 100 years is extremely remote,” but said that small objects like the Russian meteorite “will always be difficult to detect and provide adequate warning.”

He ripped into the committee for not providing adequate funding to make better progress on detecting smaller objects. “Our estimate right now is at the present budget levels it will be 2030 before we’re able to reach the 90 percent level as prescribed by Congress,” he said, according to Space.com. “You all told us to do something, and between the administration and the Congress, the bottom line is the funding did not come.” Anyone got a penny for poor NASA?

The hearing also featured statements from the head of the Air Force Space Command, Gen. William Shelton, and John Holdren, director of the White House’s Office of Science and Technology Policy.

Shelton shared his own budgetary concerns, saying his command is “clearly less capable under sequestration.”

Holdren did not have a lot of hopeful news on the killer-asteroid-detection front, either. In his congressional statement, he said “Specifically, with our current or near-future capabilities, both on the ground and in space, it is unlikely that objects smaller than 100 meters in diameter on collision courses with the Earth will be detected with greater than weeks of advance warning – a matter of some concern since the larger objects in this range could be city-destroyers.”

Holdren called for international cooperation for planetary defense, because hey, we can’t be expected to save the Earth alone. Not in this economy, at least.