An Algorithm That Helps You Stalk, Er, Meet New People On The Internet

Ah, the wonders of the intertubes never cease. 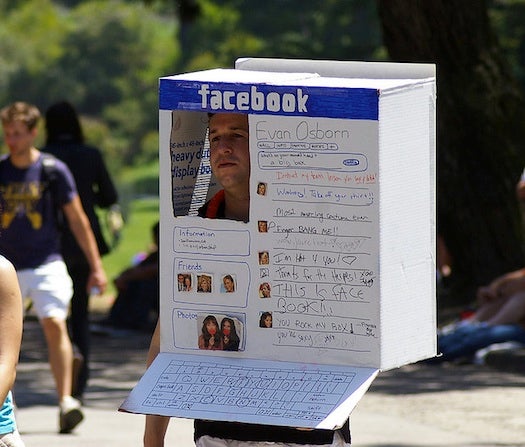 Always wished you could be friends with your favorite celebrity… at least on Facebook? This new algorithm may help you get there.

Researchers in Taiwan, China and the United States have come up with a computer program that lets you choose a target friend on a social network–whether an activity partner, a romantic interest or a work contact–then suggests a series of people for you to friend so that you can send your target an invitation after you’ve already built up a number of mutual friends.

“Why can’t I try to do that on my own?” you say. “If I wanted to meet X at company Y, I could start chatting with Z, whose cousin works at Y…” Well, in a test in which researchers pitted 169 people trying to meet friends on Facebook against the new algorithm, the algorithm did significantly better.

As MIT Technology Review explains, the algorithm tries several routes to the target, to reduce the chances of failure and to maximize the number of mutual links the user and the target have by the time the user sends out that fateful friend request. At the same time, the program attempts to balance this try-’em-all strategy by limiting the number of invitations the user needs to send, so the user can get to his or her target person faster.

So I’m trying to think of a legitimate, non-stalking use of this algorithm, and it’s pretty difficult. The best I can do is maybe if you wanted to meet someone in your field of business—a hiring boss for your dream company, say, or someone you’ve always wanted to collaborate with–who might actually appreciate knowing you, too. Even then, a manager might second-guess your credentials if she realized that the 12 mutual friends you have didn’t arise naturally from your work, but were mathematically suggested.

The paper is freely available in arXiv, a database for math and physics papers before they undergo peer review.