Your iPhone Is A Reliable Research Lab

A new study says that smartphones are feasible for use in psychological testing. 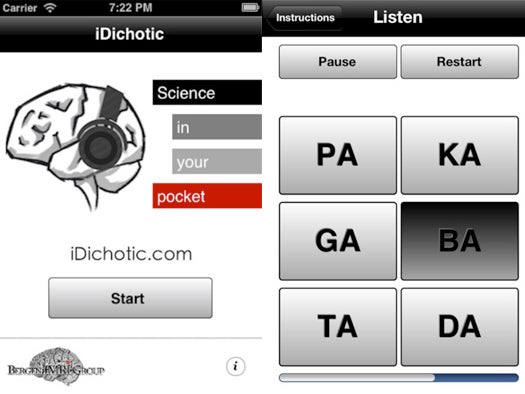 Josef Bless, a PhD candidate in psychology at the University of Bergen in Norway, was listening to music on his phone when he noticed the similarity between what he was doing and the research he conducted in his lab every day.

Bless’s research group, the Bergen fMRI Group, regularly uses a test called dichotic listening to measure brain function. Each ear hears a different syllable at the same time. The syllable the listener hears the clearest indicates which side of the brain is more active during language processing.

So Bless and his fellow researchers developed iDichotic, an app released for the iPhone/iPod in 2011. Using their phones, the app’s users can participate in the group’s research without ever having to go into the lab. About half of the 1,000 users who have downloaded the app submitted their results to the Bergen fMRI Group.

Since the app’s release, the researchers having bee analyzing the first 167 results they received from iDichotic, comparing them to individuals tested in traditional laboratory environments. They found that the smartphone results were just as reliable as controlled lab tests, opening up the possibility for wider smartphone use in psychological testing. Their results are published this month in Frontiers in Psychology.

Gathering data through an app allows research to gather larger volumes of data cheaply, and changes the circumstances under which you’re tested. Most psychology experiments take place in the lab, where everything can be controlled, but we do most of our cognition in the noisy, chaotic environment of the outside world. An app-based cognitive test that can be undertaken in any environment allows researchers to replicate real-life situations more closely.