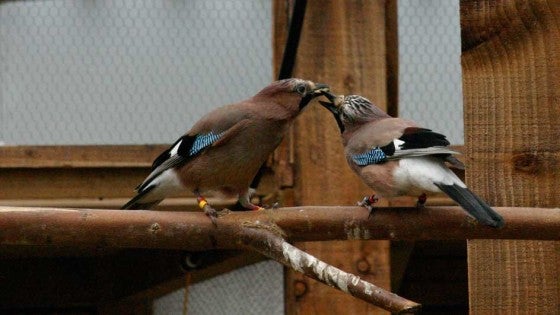 Cambridge researchers took pairs of mated jaybirds and put them in adjoining compartments, so that the male could see what the female was doing through a window. They then fed the female a meal of delicious larvae of one particular kind — either all waxmoth larvae or all mealworm larvae, while her partner looked on.

The bird couple was then reunited, and the male took up its usual role of feeding snacks to the female. The male, given a choice of the two different types of larvae, chose to feed his lady the type that she hadn’t just been eating a lot of, since female jays enjoy a bit of variety in their worms.

If the male hadn’t been watching the female, he fed her whichever larva he felt like; and likewise if he was feeding himself, his choice was not affected by what his partner had been eating.

According to the researchers, who work in the Comparative Cognition lab at Cambridge University, the fact that the male chose to give the female what she was likely to appreciate most suggests that he has the cognitive ability to intuit her psychological state from watching her.

Lead researcher Ljerka Ostojic said, “A comparison might be a man giving his wife chocolates. The giving and receiving of chocolates is an important ‘pair-bonding’ ritual — but, a man that makes sure he gives his wife the chocolates she currently really wants will improve his bond with her much more effectively — getting in the good books, and proving himself a better life partner.”

NB: This Valentine’s Day, give your sweetheart the larvae he or she really wants.