Tourists' photos can be used to identify a specific whale shark almost as accurately as researchers' photos. 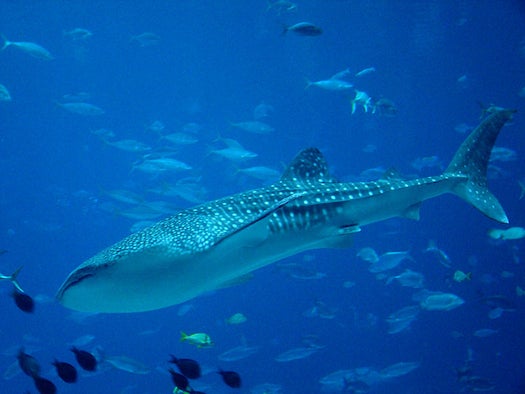 Conservationists can track an endangered species by photographing them, but why do that when there are endless animal images already floating around the web?

For example: It’s unclear exactly how rare the whale shark is in the Maldives, but researchers can get an idea of the fish’s lifespan by diving into the creature’s habitat and photographing it multiple times in different locations, then feeding that data into a computer. The whale sharks can be told apart by the spots behind their gills, helping researchers learn about them on an individual level.

But an Imperial College London study published this week shows how mining tourists’ photos can take that chore away from conservationists. The researchers analyzed hundreds of photos that tourists took of whale sharks in the Maldives and posted on the internet, and after analyzing the photos, discovered they could pick out an individual shark 85 percent of the time. Not as good as the 100 percent that professional conservationists can boast, but not bad.

This is just a proof of concept, but it bodes well for conservationists: less time devoted to snorkeling for photos means more time for other work, which ultimately bodes well for the (very gentle) whale shark.