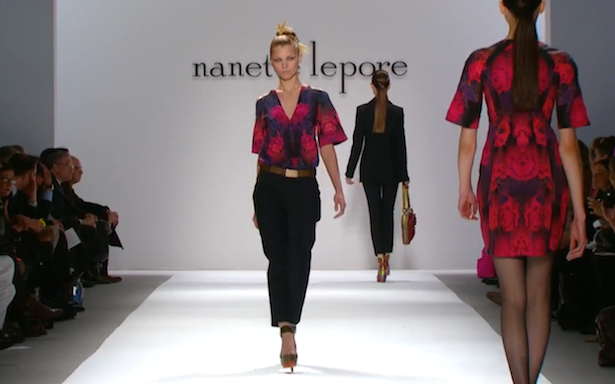 Much of the clothing in New York’s Fashion Week appears to have been designed by people from another planet, but in this case there’s actual extraterrestrial inspiration. Designer Nanette Lepore, who apparently is known for frilly outfits, drew inspiration from Mars for her latest collection. There are many hues of red, fuchsia and turquoise, the latter which is not a Mars color but, you know, that’s OK. There are also holograms and robotic-looking shoulder pads, and other interplanetary designs.

“Nanette’s fall fashion show inspiration is out of this world. Honey, let’s go to Mars,” the designer’s Tumblr site explains.

This picture apparently served as a key inspiration and also explains the turquoise. It’s not a real view of Mars, however–it’s a mosaic captured by the Mars rover Opportunity, shown in false color to emphasize texture and topography.

Lepore said in an interview with Elle that her designs aren’t just about looking for “newness.” “I was inspired by the photos they were sending back from Mars and the excitement of that kind of interspace travel, and thinking about how people are actually signing up for Mars vacations,” she said.

You can see the whole collection over at Elle.