Mystery Animal Contest: Who Is This Feathered Oddball? 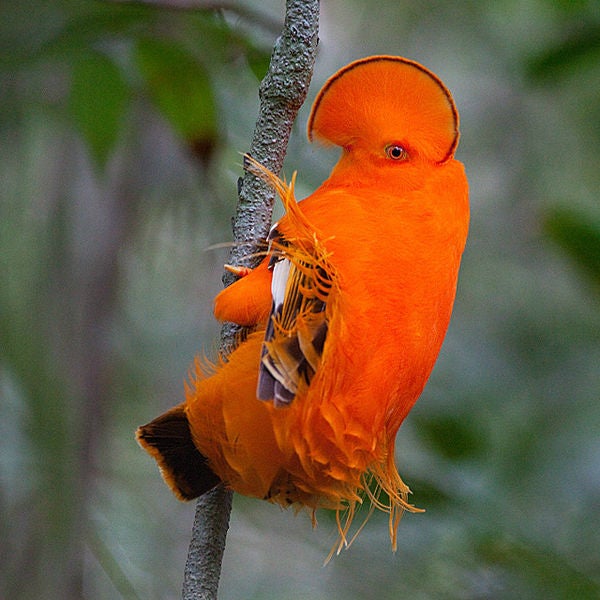 Update: And the winner is… @WRNaturalist, who correctly guessed that this is a Guianan cock-of-the-rock, Rupicola rupicola. It’s one of only two species of cocks-of-the-rock, a medium-sized passerine bird (passerines include more than half of all known bird species; they’re sometimes not-entirely-accurately known as songbirds) native to, well, Guiana. But it can also be round in the jungle in surrounding South American countries, including Guyana, Suriname, Venezuela, Colombia, and even bits of Brazil.

The male’s absurd and magnificent plumage (this is a male; the females are dull brown) serve to attract females during mating season. The males all gather in groups, called leks, and strike a pose, allowing the female to choose the best of the group. The cock-of-the-rock is extremely promiscuous (though that doesn’t seem to have anything to do with its common name)–it spends much of its time either mating with females, attempting to mate with females, or squabbling with other males over females. It is not particularly rare in its home habitat, but it is a species of slight concern because its breeding habits are so unusual that Guianan cocks-of-the-rock have never been successfully bred in captivity. Hi cock-of-the-rock!