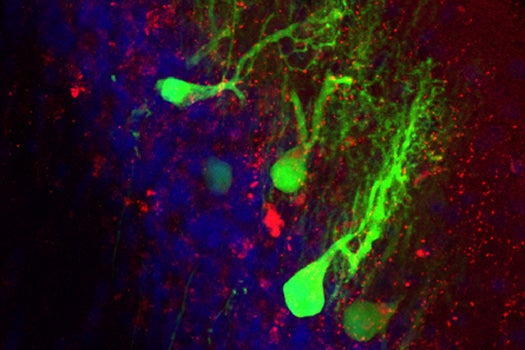 In a new study from the Proceedings of the National Academy of Sciences, mouse brain cells implanted into rats survived as long as the rats did, double the average mouse lifespan.

This runs contrary to one theory of aging that holds that our life spans are genetically determined, and cells in our body will die at about the same time.

A group of Italian researchers transplanted green-stained neurons taken from mouse embryos into the brains of fetal rats. Three years later, when the rats were near death, they were euthanized and their brains were analyzed to see what happened to the implanted neurons.

The mouse cells had grafted onto the rat brain cells, forming working neurons. They did, however, stay smaller than rat neurons. They aged as the rat cells did, living as long as 36 months rather than dying at the same rate that the same cells within a mouse brain would, after 18 months.

If neurons can live longer than their donor, longer lifespans might not necessarily lead to declining brain function. “This could absolutely be true in other mammals — humans too,” lead author Lorenzo Magrassi told Science News. This could have implications for Parkinson’s and Alzheimer’s research.