Scientists put moths in the driver's seat to learn about tracking odors autonomously. 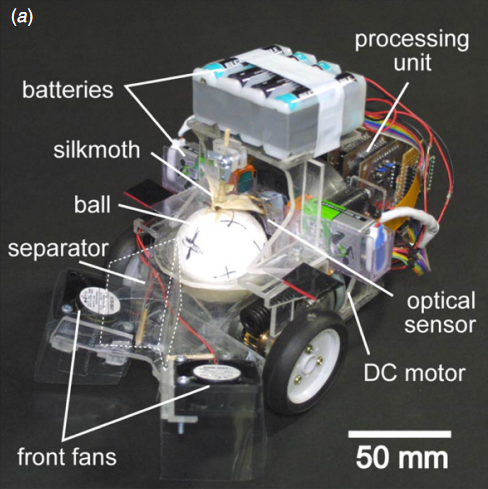 If Mothra saw this contraption there’d be some Japanese scientists on the lam. But since she’s distracted, scientists strapped hapless male silkmoths into an drivable exoskeleton and lured the specter of nightmares through a maze with female moth love juice as the prize.

We know moths fly and navigate well, but it turns out they’re fleet of foot too. The moth exoskeleton is a glorified trackball, that is controlled by the legs of the moth running on a styrofoam ball. But it’s a ride equipped with air conditioning — dual fans blow towards the silkmoth antennae. Just to torture the moth some more, researchers partially jacked up the steering to make it a little harder. And then even with an additional wind thrown in the mix, the moths quickly navigated to the pheromone. Here’s the silkmoth in action:

This isn’t the first time scientists have employed animal senses for fun (ahem) I mean science. Recall the mouse that played Quake.

Besides having a ton of fun at the expense of the fuzzy fliers, the University of Tokyo researchers designed the experiment to learn more about how to design robots that could sense odors besides the very important moth pheromones. This could be useful in applications like locating hazardous leaks or noxious fumes not detectable by human noses. Maybe moths aren’t so bad after all.