New research takes a look at food label claims since 1989 and shows how influential legislation can be. 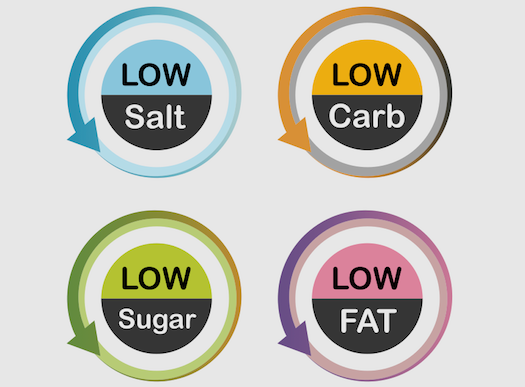 Noticed a lot of new “gluten-free” and “no trans fat” snacks in your grocery store lately? It’s not just you. A new study from the U.S. Department of Agriculture found that gluten and trans fat labels are the quickest-growing categories of food-packaging claims. Also hot now: Claims about antioxidants and omega-3 fatty acids.

The USDA has apparently tracked health and nutrition claims on every single new packaged food introduced between 1989 and 2010. That’s a lot of food labels, yo. The results offer a quantitative look at food trends in the U.S. over time. They also show that the government can have a huge influence on what gets sold. Shifts in packaging claims happened right alongside legislation about what companies can, can’t and must say about their products. 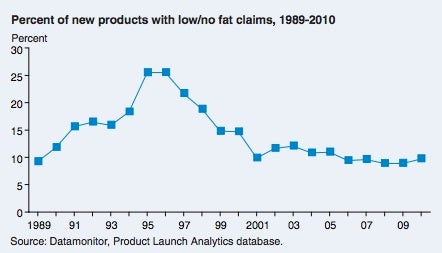 Low-fat claims peaked in the late 90s, then leveled out in the early 2000s.

The biggest piece of legislation that passed during the USDA study was the Nutrition Labeling and Education Act of 1990, which mandated the nutrition-facts label every packaged food item carries today and set rules regulating what exactly counts as “low fat,” “high fiber” and other claims.

The act appeared to effectively combat false advertising, the study’s author, economist Stephen Martinez, writes. Between 1989 and 2001, the percentage of new packages that included health and nutrition claims went down overall, with the steepest decline seen in food categories such as oils and fats–including shortening and cooking spray–and baked goods. Meanwhile, for some categories of food–fruits and vegetables, for instance–the number of claims went up.

Since 2001, the number of health claims on packages has gone up again. Martinez attributes that to companies trying to market to people’s increased awareness of health issues and weight loss, which he measured by counting the number of obesity-related programs aired on major TV news channels. In 2010, 43 percent of new foods had some kind of nutrition claim. On average, foods with at least one claim were actually healthier than packaged foods in general, Martinez found. Foods with claims also tended to sell better.

In another example of how much legislation can affect food, Martinez looked at what happened after the Food and Drug Administration required trans fat labeling starting in 2006. By 2010, “no trans fats” was the fifth most popular nutrition claim on new packaged foods, even though no packages in 2001 said anything about trans fats.

Meanwhile, Martinez’s tables and charts of top claims on packages over time are fascinating (see one example below). You can see the appearance of the low-fat craze in the 1990s, the popularity of the Atkins diet in the early 2000s and the gluten-free fad right now. I don’t know about you, but I’ve got friends who went through all three diets. 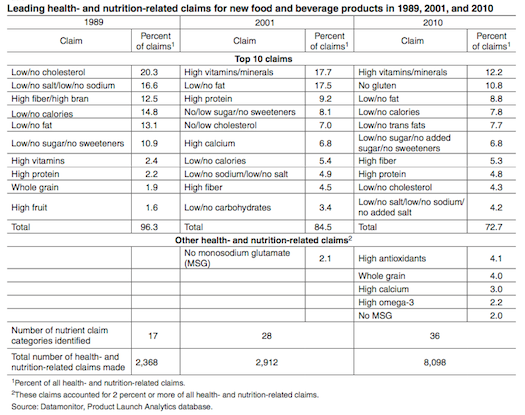 Leading health and nutrition claims between 1989 and 2010