A new method for nanoscale spying on cells' lives. 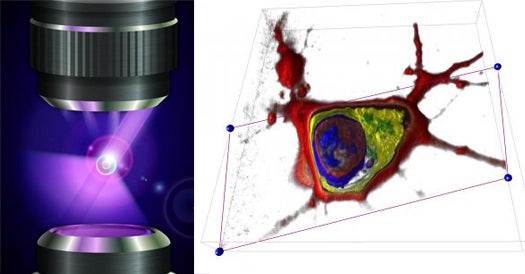 The microscopy world just went from studying still photo galleries to watching 3-D movie snippets. Two researchers have figured out a way to generate holographic images of cells at the nanoscale and see how cells react when they’re messed with.

The researchers, from the EPFL in France, described in the awesome-as-it-sounds journal Nature Photonics how they did it. First, they chose “cold”— low intensity— laser to avoid frying the cells. The laser rotates its light around the sample cell, while a holographic camera captures images from every angle. Next, a computer crunches the images into 3-D. The process takes one image a minute, which sounds slow, but splice it together with other images over an hour, and you’ve got a 3-D movie. Another advantage is that the kind of contrast agents used in still photography, which can skew results, are not needed to capture the cells in action.

The finished holographic movie of the cells can then be dissected digitally to investigate the innards — like the nucleus, membrane or mitochondria— of the movie star. Other researchers could use the technique to see a cell’s real-time reaction to medicines or toxins. It’s not quite the Fantastic Voyage, but it’s a step in the right direction, since no one needs to get shrunk.

The researchers plan to develop an instantaneous version of the holographic imaging technique next.