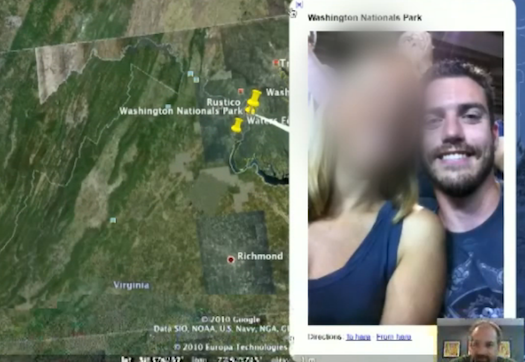 In this screencast obtained by The Guardian, an investigator at the defense company Raytheon takes his viewers on a tour of the company’s cyber-tracking software. Called Rapid Information Overlay Technology, or Riot, the software integrates data from several social networking sites so that the user can pull up all kinds of seemingly private information about people, from where they live to when they go to the gym:

Of course, we know that this kind of software exists, and that security and defense firms are hard at work on making it better. IBM and SRA International both have versions of the technology, and DARPA is actively soliciting proposals for a government-caliber version.

What Raytheon’s video shows is just how intrusive this software is–or, rather, how intrusive it was two years ago when the video was made. With just a couple of clicks, the screencast’s host pulls up a map showing all the places one Raytheon employee has checked in on Foursquare, zooms in to browse photos the employee has taken in different locations, and pulls up a bar chart of the employee’s weekly gym schedule.

“So if you ever did want to try to get hold of Nick,” the host says, “or maybe get hold of his laptop, you might want to visit the gym at 6am on a Monday.”

Raytheon hasn’t sold its new technology yet, but–as The Guardian points out–the security company is free to distribute the software to anyone: the trade controls department has designated Riot as an “EAR99” item under export regulations, meaning that it “can be shipped without a licence [sic] to most destinations under most circumstances.” Here’s hoping it doesn’t wind up in the wrong hands.