A Famous Pianist Serenades Endangered Tortoises, To Get Them In The Mood

The world's most successful pianist visited the London Zoo to provide a sexy soundtrack, but the tortoises were not impressed. 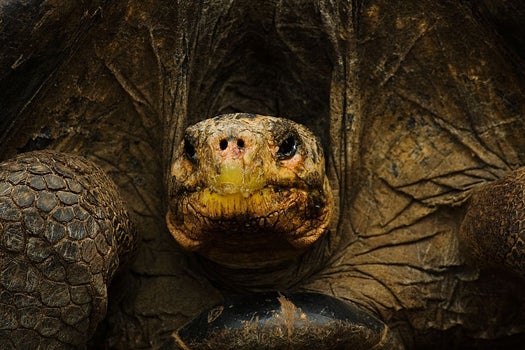 When you’re an endangered species, people will do anything to help you get busy. For a few Galapagos tortoises at the London zoo, that meant bringing in the world’s most successful pianist for a private concert.

French pianist Richard Layderman, who the Guinesss Book of World Records lists as the most successful pianist in the world (his debut album sold more than 20 million copies), visited the London Zoo to play some romantic melodies for the zoo’s tortoises.

The average Galapagos tortoise — the largest variety in the world — lives for more than 100 years. The oldest giant tortoise on record died at 152 years old. Zookeepers hoped that Clayderman’s sweet sounds would help Dirk, the zoo’s spry 70-plus-year-old male, get amorous with one of his four young female companions — Dolores, Priscilla, Polly and Dolly, 17.

Back when he arrived in 2009, Dirk, Dolly and Dolores were “making the most of their new love shack” and mating constantly.

Unfortunately Clayderman’s day-long serenade failed to inspire any expressions of tortoise love, but he hopes his presence will at least make people more aware of the problem.

At the very least, watching giant tortoises amble around to classical music is a decent way to spend your afternoon.