CNN Anchor Wonders To Bill Nye: Is A Near-Earth Asteroid The Effect Of Global Warming? 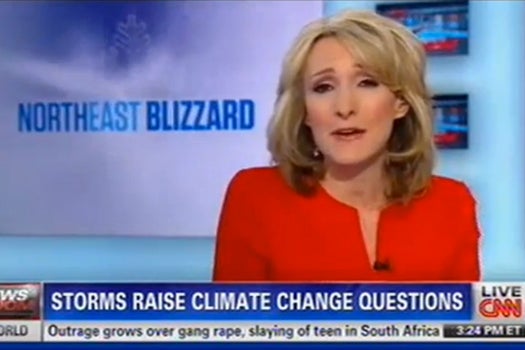 A huge storm lashed the Northeast this weekend, which meant we got to see news anchors talk about global warming for half a news cycle. (Yay.) But that also led to an awkward moment when CNN anchor Deb Feyerick tried to segue into talking about a near-Earth asteroid that’s expected to fly relatively close to Earth later this week by asking: “What’s coming our way? Is this the effect of, perhaps, global warming? Or is this just some meteoric occasion?”

Nye was good enough to respond with what sounded like a non-sequitur, explaining: “Except it’s all science. The word meteorology and the word meteor come from the same root …”

Instead of saying, “No, dummy.”

Maybe we should just give Feyerick the benefit of the doubt here. She clearly understands that global warming can have serious side effects on the planet, and although, yeah, this wasn’t a particularly smooth transition, at least the topic’s being discussed?