A peek at how fluorescent pigments are made. 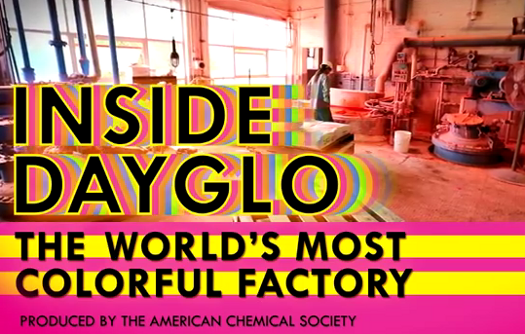 Check out this video from inside the Day-Glo Color factory showing how the fluorescent dyes and pigments, which lend eye-popping color to psychedelic black-light posters, clothing and traffic cones, are made. It’ll bring a bit of color to a normally grey and morose winter day.

The story behind the Day-Glo Color company is pretty cool, too. It was founded by two brothers, Bob and Joe Switzer (both of whom studied chemistry at UC Berkeley), who developed the fluorescent paints for amateur magic acts. Soon they were making daylight-fluorescent pigments that helped prevent the Allies from bombing their own encampments in World War II. When Bob Switzer finally sold the company in 1985, he used the money to found the Robert and Patricia Switzer Foundation, which funds environmental science fellowships and research.

After watching the video, I spent some time kicking around the Day-Glo Color website. I think my favorite link on there was to a study on “Domestic vs. Foreign Traffic Cones.”