Twirl the globe to see the world's worst polluters. 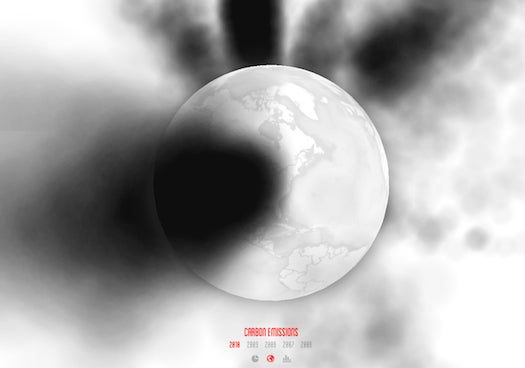 Rather than breaking down stats on carbon emissions and emptying the digits into something bland, interactive media designer Robbie Tilton made this striking globe, which looks like a view from a satellite after the apocalypse.

Turn the planet with your cursor to see black smog hovering over countries. The worse the emissions in a country, the more smog shown above it on the globe. It’s sad, but even more disheartening is the year-by-year breakdown: click on the option to view pollution in 2006, then the option for 2010, and the difference will hit you in the gut. (The U.S. barely topped China in emissions back in 2006, but China has taken a wide lead since.) Afterward, if you’re numerically inclined, you can look at the data in a pie chart or bar graph, knowing what those metric tons of carbon add up to for the planet.

Check it out here.