When it comes to therapeutic fecal transplants, sometimes the real stuff just won't cut it. 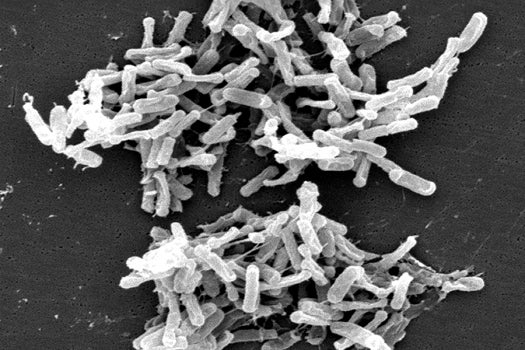 Poop slinging isn’t just for monkeys anymore — in this day and age, you can also pay a doctor to do it. Fecal transplants, which have been around since at least 1958, aim to correct an upset in the normal bacteria in the gastrointestinal tract by introducing someone else’s waste into it, in the hopes that it will restore the balance of microbes necessary for normal digestion. With a 90 percent success rate, it’s gross, but effective.

The process is much how you would imagine it — a small amount of donor feces are inserted into the intestines during a colonoscopy or with an enema. The latest discovery in the realm of medical poop treatments may make the procedure less icky: Researchers are developing a synthetic version.

Normally, when feces from a healthy person are inserted into a sick person’s large intestine, there’s a risk that the donor may transmit an infection along with their healthy bacteria, or that the patient’s body won’t accept the transmission. There’s also the fact that the sample needs to be “fresh.” Plus, of course, the fact that people tend to balk at putting someone else’s feces inside their body.

But now scientists have found away to circumvent those complications: fake poop. In a study published in January’s Microbiome, researchers mixed purified intestinal bacterial cultures from a healthy donor to form RePOOPulate, a synthetic stool mixture.

It was then transplanted (part of it, the study notes, was “drizzled”) into two patients with Clostridium difficile infection, an affliction causing severe diarrhea that’s set off when antibiotics alter the bacteria in your gut. Both patients were women in their 70s who had experienced recurring CDI.

Two to three days after the treatment, the study’s two participants regained their normal bowel patterns, which were still normal six months later. The necessary bacteria had successfully set up their colon colonization, using RePOOPulate as their Mayflower.

Since it is synthetic, RePOOPulate can be tailored to the patient’s needs. It’s also safer and more stable than the natural method, which might introduce a virus as well as the desired bacteria. Plus, a synthetic mixture can be reproduced as many times as necessary if future treatment is needed.

Researchers plan to continue studying the effectiveness of the stool substitute. With only two subjects in this experiment, the treatment is still in its preliminary stages, but it suggests synthetic stool could be a viable alternative in the future.