A new way to give 3-D structural integrity to vat-grown tissue. 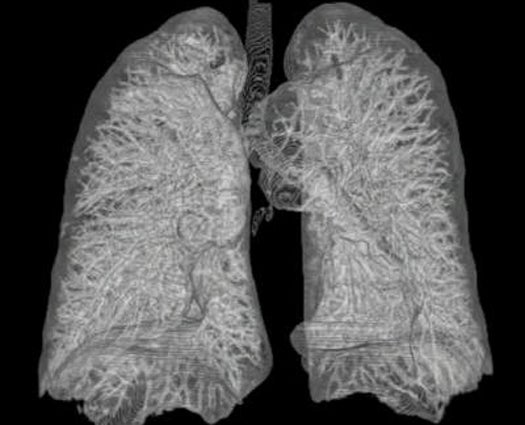 Traditionally, cell cultures have been made in a 2-D petri dish. Problem is, cells cultured flat don’t act quite the same as cells made in 3-D cultures. So instead, researchers from Rice University and Nano3D Biosciences started using magnetic levitation to get a 3-D culture. And now, using that tech, they’ve arranged four types of cells into super-realistic lung tissue. [Perfect timing! -ed.]

This is how the levitation works. Inert, magnetic nanoparticles are inserted into the cells, and researchers can manipulate them by using magnets–in this case, a magnetic “pen.” That ability to tinker with the cells opens the door for more complicated cultures. The four-layered replication, of the lung’s bronchiole tissue, is made from endothelial cells, smooth muscle cells, fibroblasts, and epithelial cells. Arranging those cells in the same way as lung tissue has never been done before, and the researchers say it’s the closest anyone’s gotten to real bronchiole tissue.

As for practical applications: since the culture can be manipulated, researchers can better simulate how toxins would enter actual lungs, exposing certain layers to a toxin as they would be in the human body. Those better simulations could eventually lead to better treatments.