Readers Sound Off: How Should Obama Go About Combating Climate Change?

During his second inaugural address yesterday, President Obama vowed to address climate change, insisting that “the failure to do so... 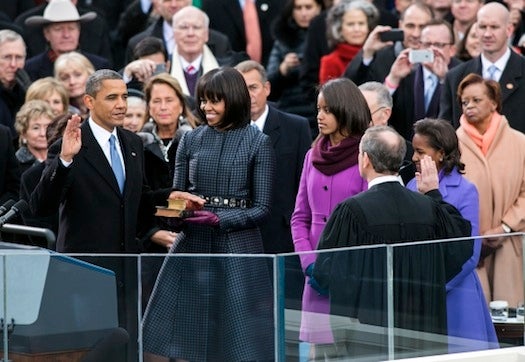 During his second inaugural address yesterday, President Obama vowed to address climate change, insisting that “the failure to do so would betray our children and future generations.” This isn’t the first time Obama has issued a rousing environmental battle cry. But the president’s urgency–as the New York Times points out, he devoted eight sentences to the subject, more than he gave to any other single issue–suggests that climate change will indeed top his agenda over the next four years. So we asked our Facebook fans: How should the Obama administration go about tackling climate change? Some excerpts, herewith:

Education of the masses on the reality of it and how it affects us personally.
—Jason Gibbons

Stop driving the car or mini-van 6 blocks to the store and 8 blocks to the gym. It’s not that hard to walk a little, and might help your health conditions.
—Blair Whitney

The solution is very very simple, or at least obvious: Encourage through any channels available a massive decrease in fossil fuel consumption/emissions. This should include encouraging at LEAST as much funding for alternative energy as the fossil fuel industry receives from the government. This should also include a decrease in the amount of government money/tax-breaks the fossil fuel industry receives. Both actually/symbolically, Obama needs to push as hard as Al Gore does on this issue and allow SCIENCE to inform his position instead of politics. …
—Peter Gaeta

Challenge individual rights and freedoms for the greater good. This is something that needs enforcement because people are lazy, and they just want convenience and ease, but there are going to be changes within our lifetime that are going to make people wish they had a strict environmental policy.
—Michaela Buskohl

Restrict gas powered vehicles. Restrict making cars that travel over the speed limit. Start weaning the U.S. off of oil made products, limit the use of coal burning.(maybe) that may be hard to do though.
—Steven W Chambers