Inspired by the bastard hogberry 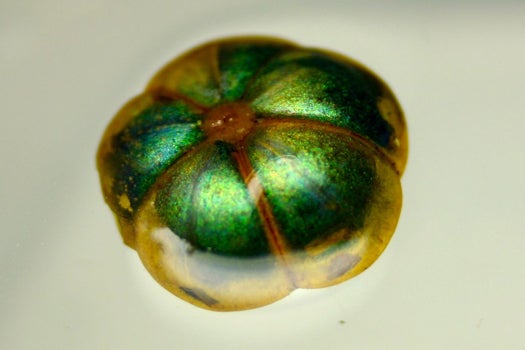 The bastard hogberry changes color when floating in water.

Inspired by a tropical fruit, a team of materials scientists have created a new kind of fiber that changes color as it stretches. The multilayer fiber turns from reddish to blue as you put increasing strain on it.

Researchers from Harvard University and the University of Exeter in the U.K. released their findings earlier this week in the journal Advanced Materials. This could pave the way for smart fabric that could change appearance in response to heat or pressure.

By studying the fruit of Margaritaria nobilis, a South American tropical plant commonly known as the “bastard hogberry,” scientists identified the structural origins of the seed’s color, a bright blue.

The vivid color of the bastard hogberry is designed to fool birds into eating (and spreading the seed) of the non-nutritious fruit, thinking it’s a more delicious competitor. The plant doesn’t change color, but by combining its properties with an elastic material, scientists made a fiber that could be stretched into various different colors.

Due to the way its surface structure manipulates light, “the fruit of this bastard hogberry plant was scientifically delightful to pick,” said principal investigator Peter Vukusic, an Associate Professor in Natural Photonics at the University of Exeter.

Cells on the skin of the seed have a curved, repeating pattern that interferes with light waves and creates colors, much like the bright colors you can see in soap bubbles. The team of researchers copied the vital structural elements of this system using thin fibers rolled up in a polymer bilayer like a high-tech Hostess Ho Ho.

In the future, it could be used to create a shirt that changes color under muscle tension or alerts you to heat strain.