ESA wants your help to guide development of an international asteroid mission.

We may be safe from killer asteroid Apophis, but plenty of other near-Earth asteroids could pose a threat sooner or later. Sure, humans could send up a probe or a space sail in a desperate attempt to deflect it–but what if that mission fails? We had better start testing now, so we’re sure this type of Hollywood scheme actually works. Enter the AIDA mission.

The European Space Agency and Johns Hopkins University are working together on a two-part asteroid interception and deflection mission, but they need help to refine it. ESA wants your research ideas for ground- and space-based studies that will improve the Asteroid Impact and Deflection mission, or AIDA.

It’s a two-part mission with two separate spacecraft, which would fly up to intercept a binary asteroid. The goal is to see how the objects’ relative spin changes, so you need a binary asteroid or one with a small moon. Several asteroids have mini-moons orbiting them. 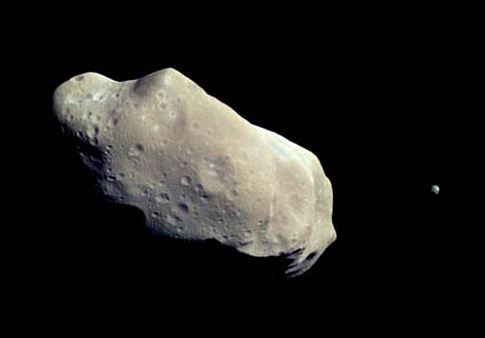 Asteroid Ida and Its Moon, Dactyl

The first spacecraft, the Double Asteroid Redirection Test, would smash into the smaller of the two space rocks, which should change the pace at which it spins relative to its companion. This could change its direction and trajectory, too–that would be the entire goal if such a space rock threatened Earth. To see how well it works, a second spacecraft, the Asteroid Impact Monitor, would watch from a nearby post. Astronomers on Earth should be able to notice changes in the asteroids’ relative motion, but AIM’s close viewing spot will ground-truth those observations, as ESA explains.

Having two independent satellites increases the odds of mission success, because both can work without the other. But if they both work as planned, astronomers will get even better data, said Andrés Gálvez, ESA AIDA study manager. “The vast amounts of data coming from the joint mission should help to validate various theories, such as our impact modeling,” he said. That would ensure a deflection mission could really work–which will be good to know if and when a menacing space rock like Apophis does set its sights on Earth.

You can learn more about AIDA, and send some input to ESA, by clicking here.