Is That A UFO In This Timelapse Video Of A Meteor Shower?

Sunchaser Pictures went out starchasing for "Death Valley Dreamlapse," and the results are pretty spectacular. Plus, a UFO! Maybe! 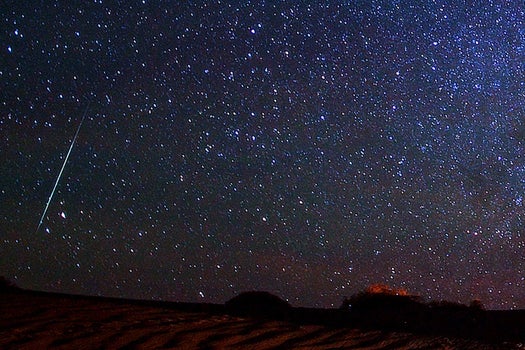 A few hardworking filmmakers from indie film company Sunchaser Pictures trekked out to Death Valley’s remote Eureka Dunes during the Geminid Meteor Shower peak in mid-December, and the result is some truly wonderous starporn.

The 3-minute timelapse (shot with two DSLRs and complete with Moby soundtrack) condenses every 50 minutes into every 5 seconds of video. It captures a pretty stunning view of the rotation of the night sky, absent the usual pest of light pollution. And then, amid the meteors, a zig-zagging Unidentified Flying Object.

The filmmaker, Gavin Heffernan, explains his confusion in the video’s description: “The “UFO” appears at (1:30-1:35) and makes three broad circular sweeps over the desert…There was no sound, so it definitely wasn’t a helicopter.”

Lesson learned: Freeze your butt off in the middle of the desert for a night and you’ll be rewarded with great celestial views — and maybe a newfound belief in alien sightings.