We've seen 'G-quadruplex structures' before, but a new study shows they are much more prevalent in our genomes than we thought. 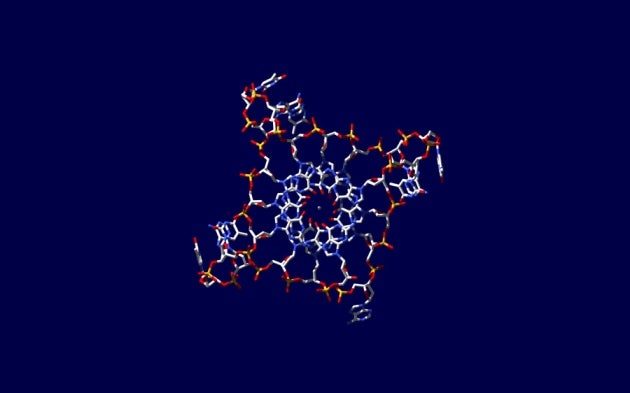 The above is a digital model of DNA, but it’s probably not the DNA you’re familiar with. The double-helix structure of DNA and RNA–two strings of nucleic acids spiraling around each other and held together by complementary base pairs–is both nearly universally recognized and central to its role as the fundamental vehicles for cell function. But it turns out that a square shaped, four-strand DNA structure (like the one above) is likely more common in our genomes than we previously thought, and that could have important implications for biology.

Four-strand DNA–or “G-quadruplex structures” (the G is for the base guanine)–is nothing new to genetic scientists. It can be easily conjured in the lab via guanine-rich strands of synthetic DNA, for instance, and it has long been thought to occasionally form naturally in biological cells. But a new study published online at the journal Nature Chemistry and conducted by University of Cambridge researcher Shankar Balasubramanian suggests that G-quadruplex structures are more common in natural genomes than we thought, and that they may carry out some important genetic business.

This has particular importance in the field of cancer research. Some researchers have previously suggested that these quadruplexes can be found in places along the genome where gene regulation occurs. Errors in gene regulation are, of course, one of the root causes of the kinds of abnormal cells that lead to cancerous cell replication. So the Cambridge researchers engineered an antibody designed specifically to seek out and bind to G-quadruplex structures while steering clear of double-helical structures. When introduced to human cells, the antibody bound itself to several sites along the chromosomal chain–not just in the few where the researchers expected it to–reinforcing the idea that G-quadruplex structures are more prevalent in more places than originally thought.

If researchers can figure out all the places where these structures are forming along the genome, they may be able to zero in on the places where genetic ailments like cancer get their starts and try to mitigate that process.