BeerSci: Why You Should Never Drink Beer From A Clear Glass Bottle

Avoid gross-smelling drinks by protecting your brew from light. 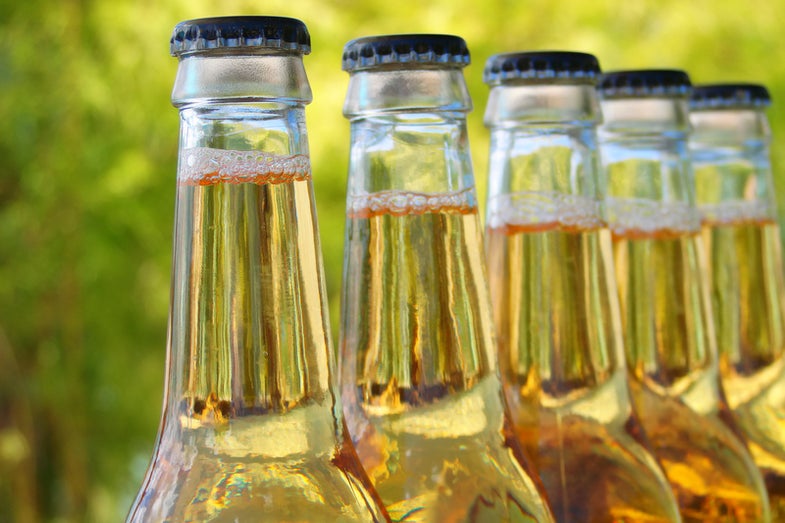 The subject of Beer Gone Bad came up at the office the other day, and I gave my colleagues an impromptu lesson in why “skunking” in beer is very different from a lot of the other ways a beer can turn on you. (And there are many, many ways. We’ll cover some of those in a later column.) I wasn’t initially going to write about this particular topic because I thought that pretty much everyone who drank beer and was science-minded knew about the correlation between sunlight and a skunky beer. But it turns out that I was wrong — it wasn’t a well-known phenomenon, even among my colleagues — so I’m going to do my beer-nerdulent duty and replicate the explanation here.

Skunked beer smells just how it sounds: You crack open a bottle and an unmistakeably mustelid pong hits your nostrils. This can happen in any beer, but skunking seems most prominent in lagers due to their otherwise-mellow aroma profiles. Further, many of these self-same lagers (think Corona, Heineken, etc) are also shipped in clear or light green bottles.

The industry term for skunking is “lightstruck,” and it’s a beer fault that has been written about since about 1875. By the 1960s, scientists had narrowed the culprits down to a triple-threat of hops, a sulfur compound and a molecule known as a flavin. But despite more than a hundred years in the literature, the mechanism and chemical reactions that caused skunking were only elucidated in 2001 with the paper Mechanism for Formation of the Lightstruck Flavor in Beer Revealed by Time-Resolved Electron Paramagnetic Resonance by Burns et al. in Chemistry–A European Journal. In it, researchers used a special kind of spectroscopy, the aforementioned time-resolved electron paramagnetic resonance (TREPR), to look at how certain compounds in beer behaved as they were irradiated with light. TREPR is similar to what happens when you get an MRI, except that in MRI the technician is looking for the spins of atomic nuclei, while TREPR is looking for spins of unpaired electrons. This is important because most photochemical reactions, at some point in the pathway, create unpaired electrons. Following where those go, and to which molecules they are attached, is key to understanding the entire reaction mechanism. 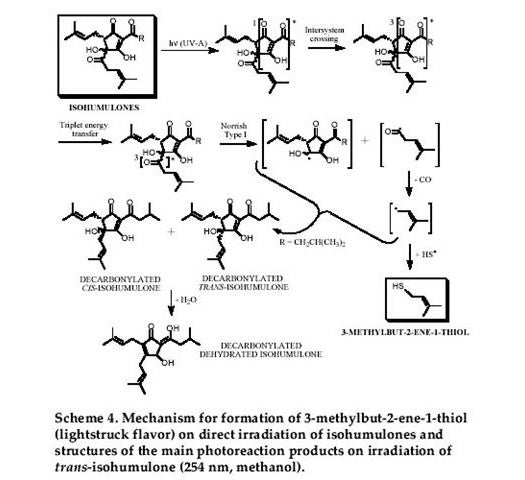 The series of reactions, initiated by ultraviolet light, that produces 3-MBT in beer.

What those researchers found is that there are two distinct pathways to getting skunky-smelling compounds in your beer. The two main actors is this tale of woe: hop alpha acids and light. Not heat. Not oxygen. Light.

The bittering agent generated from hops while boiling beer wort is a compound called isohumulone. Ultraviolet light can degrade isohumulone all by itself. But it turns out that visible light can also induce isohumulone degradation — it just needs a helper molecule, in the form of riboflavin. Once the proverbial ball starts rolling (or, in this case, the electrons start hopping), a series of reactions take place that eventually produce the compound 3-methylbut-2-ene-1-thiol. That mouthful, known colloquially as 3-MBT, is your skunk. In fact, 3-MBT is chemically very similar to one of the three main compounds found in a skunk’s defense spray.

Normal visible light can also produce skunked beer, but the reaction needs a helper molecular such as riboflavin.

All beers that have been bittered with hops can suffer skunking: As an experiment, get a draft beer poured into a clear glass and then let it sit in the sun for 10 minutes or so. Compare that beer to one fresh from the tap. You should definitely detect some skunk in the lightstruck beer. With clear, green or blue bottles, the glass doesn’t filter out the ultraviolet and blue wavelengths that start the skunking reaction. Brown bottles are much better at keeping those wavelengths out of your beer.

In recent years, “advanced hop products” such as dihydroisohumulones (basically, chemically modified hop extracts) have proven to be “light stable.” I don’t know for sure if the likes of Heineken or Corona use these things in their beers. But recent work by scientists in Belgium indicates that even these ostensibly light-impervious hop extracts still generate off-flavors from exposure to light, including an “onion-like” compound 2-sulphanyl-3-methylbutanol — just not to the degree that raw hops do.

Beer With A Side Of Onions

The flavor profiles of the same beer. One bottle (a) was stored in the dark for three months. Another bottle (b) experienced three months of day-night cycles of light.

In the end, if you want to avoid the skunk entirely, just buy a beer that has been packaged in a keg, cask or can. Those beers can (and do) develop bad flavors, but you’ll never get one that has been skunked.