At high outback temperatures, gasoline vaporizes too quickly to pump. 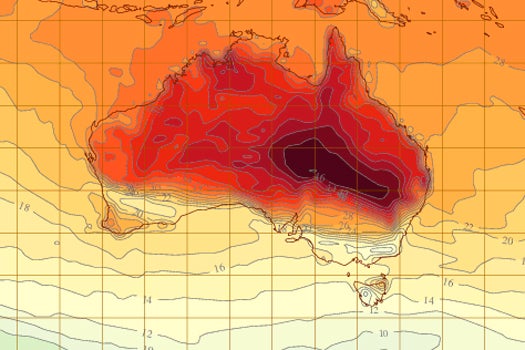 Australia's weather map for Sunday continues to look red hot. At least it's not purple. Australian Bureau of Meteorology
SHARE

Continuing Australia’s trend of being majorly unpleasant this week, it got so hot in the Outback town of Oodnadatta a few days ago that you couldn’t even pump gas.

On Monday, temperatures in the town reached 48.2 degrees Celsius (118.76 degrees Fahrenheit), and drivers who stopped for gas were stymied when unleaded fuel became unavailable because it was vaporizing in the heat.

This leaves the town in a though spot, since gasoline can’t be pumped temperatures above 45 degrees Celsius, lest it vaporize. According to The Age, the average maximum January temperature in the area has gone up 0.9 degrees in the past 30 years, to 38.4 degrees Celsius. The owner of a local roadhouse described the recent weather as “like a wall of fire.”

Not being able to fuel up isn’t the only thing travelers have to worry about, either, since some tar roads have also melted. Yikes.