The project will be one of the largest radio-tagging experiments of its kind. 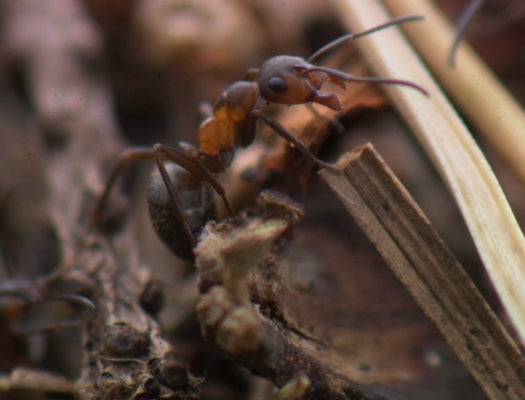 Samuel Ellis, a biologist from the University of York, will tag 1,000 hairy wood ants with radio receivers to find out how they communicate and travel. The multiyear project, which begins this summer in Derbyshire, U.K., will be one of the largest radio-tagging experiments of insects in the wild.

Is it difficult to catch a hairy ​wood ant?
No, says Ellis. The one-centimeter-long ants are easy to spot—they move on self-cleared roads—and are not very fast. He picks up an ant by the legs with his bare fingers. “They’re quite obliging,” he says. “They grab on with their teeth.”

How does he get a radio tag onto a squirming ant?
First, he dabs glue onto the ant’s back with a matchstick. He then uses a second matchstick to maneuver the receiver into place. He puts each ant into solitary confinement in a plastic box for about an hour until the glue dries.

Does the tag weigh the ant down?
No. The receivers are lightweight and only one millimeter by one millimeter. Considering that ants can carry up to twice their body weight without any notable change in behavior, there’s not much cause for concern here.

How will he find the tagged ants later on?
He’ll wave a handheld radio scanner over the ant trails and nests to locate, and then map, the ants’ whereabouts.