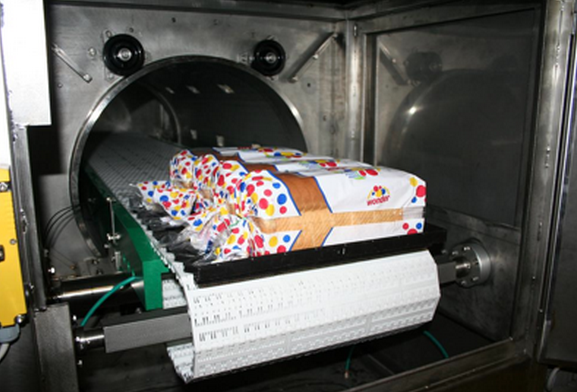 Americans waste 40 percent of the food they buy, whether because they forget about it in the back of the fridge, fail to wrap it properly, or something else. It’s equivalent to about 20 pounds per person per month, according to one study. Now a new spinoff company claims it can preserve at least some of our food for longer, by zapping it with microwaves.

Nuked bread can last up to 60 days, according to the company, MicroZap, which spun off from Texas Tech University. Among wasted foods, bread is a major culprit, meeting its end in the garbage can once it becomes festooned with greenish growths of mold. This usually happens within 10 days of the bread being baked. MicroZap’s method kills the mold spores, keeping bread mold-free for two months and helping Americans reduce some of their food waste. Now you could preserve all those loaves of Wonder Bread you hastily grabbed at the supermarket during the Hostessocalpyse!

The equipment, which looks like a CT scanner for food, was originally developed to kill organisms like multi-resistant staph bacteria and salmonella. But its developers realized it also kills bread mold in about a 10-second zap. It works much like a home microwave, but the waves are produced in various frequencies, which allows for uniform heating, MicroZap CEO Don Stull told the BBC.

The technology could also preserve fresh food like poultry, produce and more. Just no cantaloupes, unfortunately; they get damaged tumbling around in the mold-zapping machine.