Barack Obama's second term should see the same focus on funding science and technology--although the budget ax is looming. 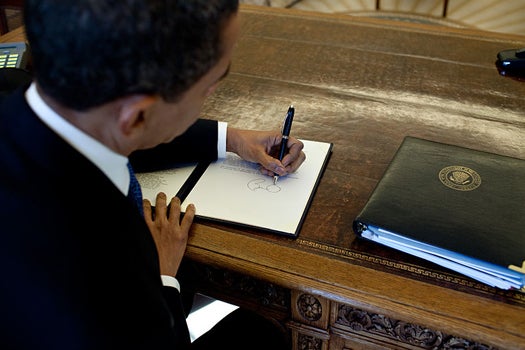 With his second term secured, President Barack Obama can now turn his full attention to advancing the priorities that will help define his legacy. On the stump, Obama championed science and technology. Under his administration, those fields, particularly renewable energy and medical research, should continue to enjoy significant federal support over the next four years.

John Holdren, Obama’s science and technology adviser, told Popular Science: “We are committed to continuing our focus on ensuring that science, technology, innovation, and education have the support they deserve in order to fuel America’s economy, prepare the tech-savvy workforce and science-savvy citizenry of tomorrow, and meet the manifold challenges of health and biomedicine, energy, environment, and national security.”

Although the lion’s share of federal research dollars still goes to defense—56 percent in fiscal year 2012—7.5 percent is devoted explicitly to “general science and basic research.” Close to half of that finances the Department of Energy’s Office of Science, which supports work that advances the development of new fuels, materials, and technologies.

Assuming it escapes sequestration at the end of 2012, funding for health research, which accounted for 22 percent of R&D dollars in 2012, should also remain strong. Advocates of stem cell research are particularly elated over Obama’s win. An executive order he signed in 2009 lifts some limits on the use of such cells for federally funded research.

Federal support for research and development has been declining in absolute terms since 2010; the National Science Foundation’s R&D budget fell from $7.6 billion in 2009 to $5.5 billion in 2011. Obama has proposed spending $142 billion on R&D in 2013, about $1.7 billion more than last year—but the Republican-led House will likely attempt to cut nondefense research dollars, as it has for the last two years.

Alan Leshner, CEO of the American Association for the Advancement of Science, says his group is optimistic. Even given current politics, Leshner is confident Obama can protect R&D from the budget ax: “Investments in science, everyone agrees, are investments in the future that have paid off handsomely in the past.”