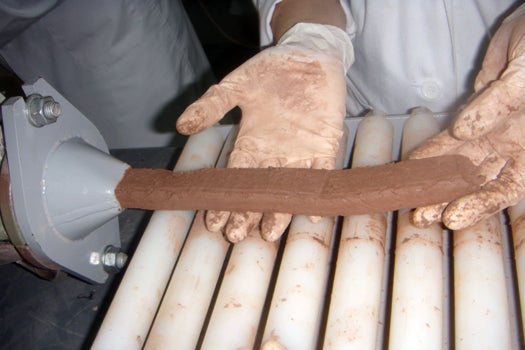 We don’t want to be unkind, because it’s nice that people are working toward a future where we won’t have to rely on traditional brick-making methods, which produce tons of carbon dioxide. But a new idea for “green” bricks is a little less, uh, aesthetically pleasing than other ones we’ve noticed. (See here and here.)

That’s the downside. The upside is this brick-making project comes from stuff in the recycling bin. Researchers from the University of Jaen in Spain collected waste from a paper factory and sludge from the factory’s waste-water purification process. By mixing that with clay and sending it through a “pressure and extrusion machine,” the researchers got bricks. (The “pressure and extrusion machine” is also reminiscent of the sausage-making process, which doesn’t help with the disgustingness.)

The composition of the bricks makes them especially good insulators, the researchers say. But they aren’t perfect. Though they pass legal requirements for use, they are less durable than traditional bricks. So we probably won’t see many of these in buildings. Good news for our eyeballs.