Researchers discover an adorable (yet scary!) species of slow loris. 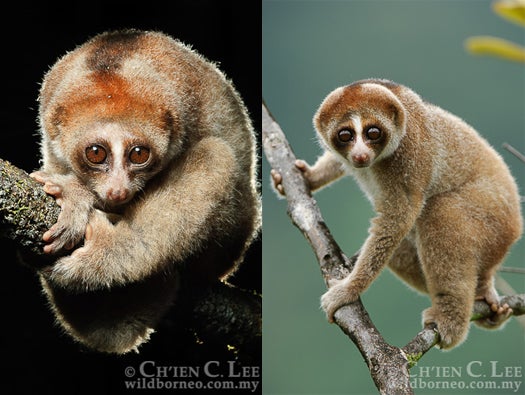 In the jungles of Borneo, an international team of researchers have discovered a new species of slow loris, and classified two previously known subspecies as distinct species in their own rights. That up there is the Kayan loris, the new species.

The slow loris may have gained popular fame through YouTube videos in which terrified lorises grasp umbrellas, but it’s actually a fascinating animal even when it’s not fearing for its life. (Yep, that’s what’s going on in those videos: when threatened, lorises become docile and passive, which is different from being friendly. Oh, and the pet trade in lorises is brutal and horrifying, just FYI.) It’s one of very few venomous mammals and even fewer venomous primates; it has a poison gland on its elbow which it licks to mix with its saliva, giving it a venomous bite. It also has a highly peculiar arrangement of blood vessels in its hands and feet, so that it can grasp branches for hours on end, supporting its own weight, without losing sensation.

The various species of slow loris, which is a strepsirrhine primate related to lemurs and bushbabies, are kind of hard to tell apart; the new classification comes from the unique identity given by the coloration on the loris’s “facemask.” The new species, Nycticebus kayan, is named for the Kayan River, which runs through the central-east section of Borneo where it’s found.

The study appears in the American Journal of Primatology.