The Great Antarctic Search For Life Is Over (For Now)

The Lake Ellsworth drilling project was supposed to be a quick, high-tech hunt for microbes under the surface of Antarctica, but tech problems forced researchers to scrap it. 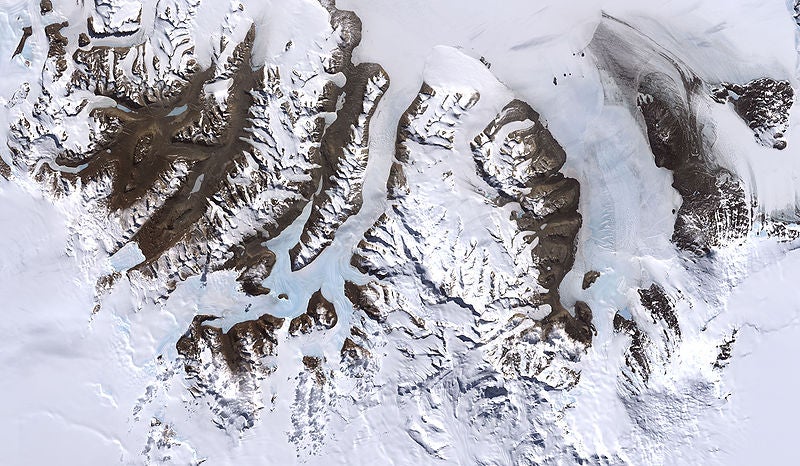 Robert Simmon, based on data provided by the NASA GSFC Oceans and Ice Branch and the Landsat 7 Science Team
SHARE

The British Antarctic Survey above Lake Ellsworth was a Great White Hope for discovering never-before-seen life. Scientists spent years planning an ambitious study of the lake, which sits two miles below the Antarctic surface, hoping to burrow through the ice with a hot-water drill. If they’d arrived at the bottom, the team might’ve found microbes with biology never observed by humans. Instead, the team’s heading home.

What happened? First, it’s important to know what was supposed to happen. Scientists would open a borehole with the drill, giving them enough time to lower remote-control probes into the depths. Those probes would search for life. All of this would’ve taken a mere six days.

But there were complications. The drill, meant to dive straight down, leaked hot water into the ice well before its destination–just 300 meters under the surface, or about 10 percent of the way to Lake Ellsworth. A part for the drill apparently malfunctioned, too, forcing the team to fly a spare all the way out from Britain.

These were expensive missteps. in all, the project cost about 8 million pounds. When the researchers return, there will be a review that offers a more detailed look at what exactly went wrong, and the researchers might even get another shot at it. But that could mean another few years of planning and implementation.

Some other Antarctic studies are faring a little better. Earlier this month, NASA scientists, along with other researchers, dug a (relatively meager) 65 feet below the surface, uncovering microbes in Lake Vida. A Russian team reported success for its foray below the ice in February, drilling up to 800 meters into a lake that’s been buried for 14 million years (though not without some controversy).

The big appeal of Ellsworth is that it might be home to even older, more isolated microbes. The older the microbes, the weirder they are–and possibly the more we can learn from them. Scientists were hoping projects like Ellsworth would provide a window to similar environments on Jupiter’s moon Europa or Saturn’s Enceladus, which means it would help scientists understand how life might look on other planets.

Maybe we’ll have to cut out the middleman and head to space.