What Does The U.S. Look Like To Political Ad Buyers? [Infographic]

When you make the geography reflect the electoral college, things get weird. SuperPACS and other political spenders understand that. 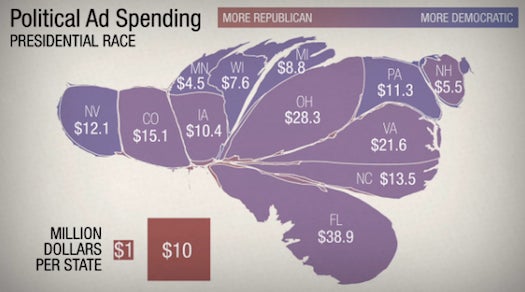 With the popular vote so close this election, eyes are on swing states even more than usual. Now what if we showed, cartographically, how outside campaign spenders pour money into a race? No surprise: the money for political ads goes to the swingiest of states. Distort the country by per capita spending and it gets even more jarring.

Just add an old song (swing, of course) and you’ve got this excellent video from NPR (see below) showing what the U.S. looks like to superPACs and other groups during election season.

First, the electoral college as it actually looks.

Map Of The Electoral College

An example of the electoral maps seen in 2008.

Here the states have been resized proportionally based on their votes in the electoral college. They’ve also been reshaded according to how blue or red they leaned in the 2008 election. (Pure purple is a 50-50 split.) 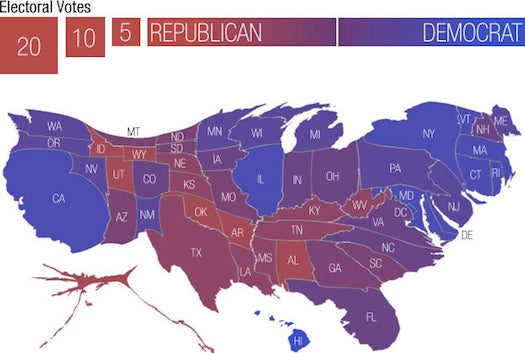 The United States, with state sized based on electoral votes.

Now it’s resized again based on outside ad spending from this election. The purplest states, you can see, get the attention. 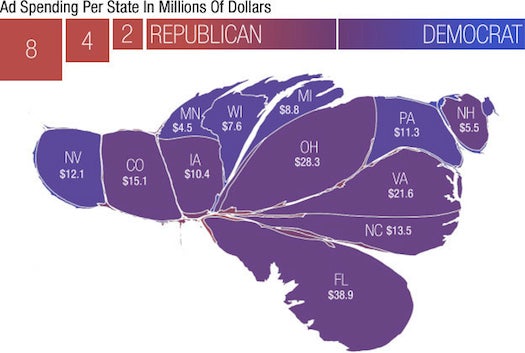 The United States, with state size based on ad spending by outside groups in presidential race.

Resize again based on spending per voter and it’s even more skewed. 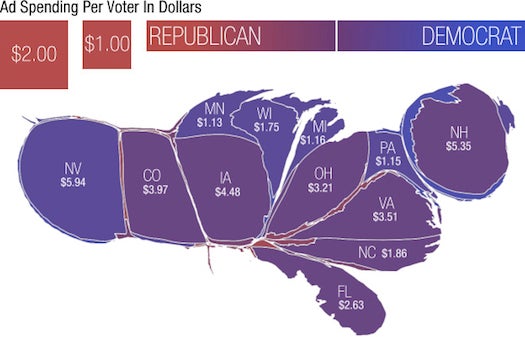 The United States, with state size based on political ad spending by outside groups on presidential race per voting age adult.

That’s the U.S. until next week. Enjoy the courting while it still lasts, swing states.