Did Your Team Win Monday Night Football? And 9 Other Weird Questions That Reveal How You’ll Vote Today

If you're still undecided, somehow, you should know about these weird psychological cues that could sway your vote. Sometimes it's not the big issues--sometimes it's, like, did your team win its most recent game. Seriously. 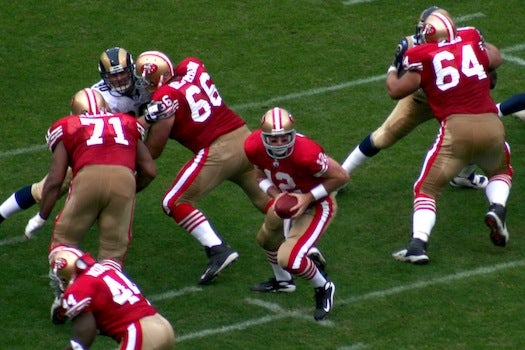 There are many big things at stake today. Important things. Issues that will shape our country, decide the state of the economy, the rights of minorities, the way we interact with and occasionally drone-murder foreign nations. But, we’re going to assume you’re already aware of all that stuff.

Psychologists have for years been studying the tiny, relatively unimportant social cues that get us to vote one way or the other. (It’s helpful, for American psychologists, that we have only two parties. For the rest of us, ehhh.) The reasons we vote aren’t always big–sometimes they’re subtle and small. So, here is a quiz to predict who you’ll vote for, based on those cues.

2. Which candidate would you say you physically resemble the most?
a) Barack Obama (0 points)
b) Mitt Romney (2 points)
c) Neither, due to gender or other, weirder reasons (1 point)

4. Are you good at pronouncing uncommon words?
a) very good (0 points)
b) ehh I take my best guess (1 point)
c) I find the name “Zoe” unnecessarily misleading (2 points)

7. When you watch scary movies, how scared do you get?
a) really scared! (2 points)
b) a normal amount of scared thank you very much (1 point)
c) I don’t scare easily (0 points)

8. Is your polling place dirty or smelly?
a) nope, pretty clean (0 points)
b) now that you mention it, it’s a little gross (2 points)

9. What part of your brain would you say is larger and/or more active?
a) my amygdala, for sure (2 points)
b) my anterior cingulate cortex is, like, really active (0 points)
c) what? (1 point, and learn more about your own brain, idiot)

1. A study has shown that the location of your polling place matters. If you vote in a school, your thoughts will land on education, a social issue more strongly championed by the liberal candidate. But if you vote in a church or fire station, your thoughts will land on religion or security, respectively, both of which are more associated with the conservative candidate. It’s called “contextual priming,” and it works even if you’re just shown a picture of something related–lockers, say, or religious symbols.

2. A study from Danny Oppenheimer and Alex Todorov called “Speed Dating for Senator” indicated that we tend to vote for people who look like ourselves. The researchers here actually merged a photo of the tester with a photo of a political candidate, and the testers invariably preferred that one to the original, non-merged candidate. Does everyone tell you you look like Mitt Romney? There’s a fair chance you’re voting for him, and not just because you’re demographically similar–it’s because we identify with those who resemble us.

3. A greater exposure to themes of death tends to result in a more conservative voting pattern, according to this study.

4. We’re more likely to vote for a candidate whose name we can pronounce easily. Given that a moderator confused “Obama” for “Osama” during a presidential debate this year, we’re going to go ahead and say those who have trouble with pronouncing less common American names might gravitate towards the easily-pronounced Republican.

5. We tend to identify with those who share our birthday. Romney was born in March, and Obama in August.

6. The reason candidate ad campaigns focus on hobbies so much is that we also tend to identify with those who share our interests, even if those interests are totally irrelevant to the job of being the President. These sports are, according to many sources, the main hobbies of the two candidates. Numbers 4, 5, and 6 are all taken from Democracy Despite Itself by Danny Oppenheimer and Mike Edwards.

7. Republican ads are often accused of using scare tactics. Well, the science backs it up–those who are more likely to be jumpy during scary movies tend to be more conservative.

8. A study in Psychological Science indicated that “subtle reminders of contamination can trigger a knee-jerk fear of outsiders,” which aligns with a more conservative bent.

10. A study in the Proceedings of the National Academy of Sciences suggests a correlation between the success of one’s sports team and voting. If your team wins, you’re more likely to vote for the incumbent.

Disclaimer: of course this is a fun silly thing, not to be taken too seriously. There are correlation/causation issues with some of these studies, and, besides, no even mildly intelligent mammal would think the outcome of a football game would have much effect on a presidential election. What we’re saying is, this should be fun, but what’s MORE fun is being informed and voting. I mean, voting isn’t as fun as, I dunno, sledding, but it’s a little bit fun and also important. Go vote, is what we’re saying.