Sad That Baumgartner Didn’t Jump? Cheer Up With These 7 Completely Insane Aerial Stunts

A 15-mile free fall, a tennis match at 3,000 feet, and more daredeviling from the archives 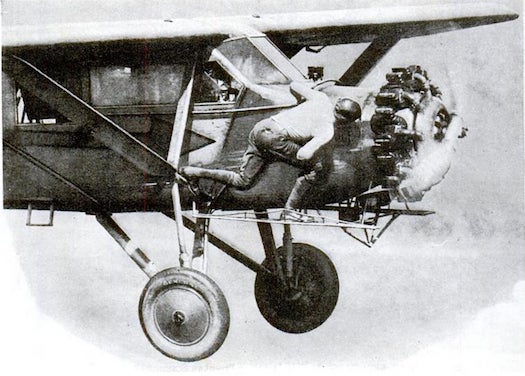 Later this week, when Felix Baumgartner tries yet again to jump out of a helium balloon 23 miles above Earth, he will have modern science and medicine (and Red Bull) to back him up. Not so for the daredevils in this gallery, all from the 1920s and ’30s; they were still impressed by electricity and penicillin.

Heck, the airplane had barely been invented when these feckless stuntmen (and one stuntwoman) decided to test the limits of aerial acrobatics. Check out this archive gallery for a terrifying headstand, an in-air engine repair, and a very windy game of tennis. 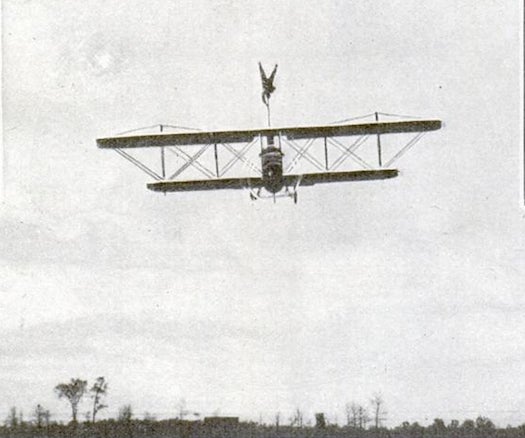 It wasn’t impressive enough that aeronautical engineer and “all-around daredevil” George Plummer could stand on his head on top of a six-foot pole. No, the brash Mr. Plummer – seen here soaring over Grover Hill, Ohio – had to add a rickety old airplane to the mix. “In spite of the terrific wind that is created by an airplane in flight, Mr. Plummer is able to maintain his balance.” George, what were you thinking? Read the full story in our November 1921 issue: Most Daring Airplane Stunt On Record. Brothers Kenneth and John Hunter had a plan for this trip: Break the world record for longest flight by staying in the air for more than 18 days. Midway through the journey, however, they realized the engine needed new spark plugs. “Thousands of feet above the ground, it was necessary to crawl forward along a flimsy catwalk and risk being thrown off by an electric shock.” Two other brothers, Walter and Albert, snapped this photo from the refueling plane as they cheered on their gutsy sibling. The repair was a success, and the Hunter brothers set a new endurance flight record when they landed after 553 hours. Read the full story in our September 1930 issue: New Spark Plugs Help Endurance Flight. 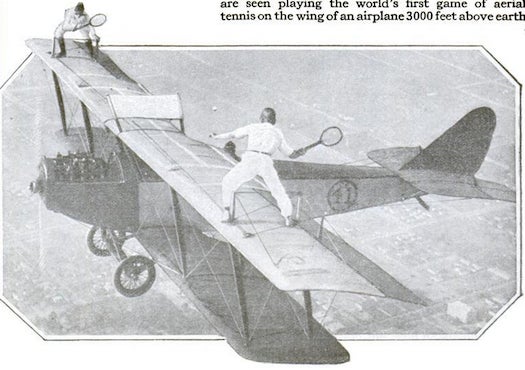 Ah, the Roaring Twenties: challenging gender roles and the laws of physics. Here, “famous woman flyer” Gladys Roy and Ivan Unger play the world’s first aerial game of tennis, 3,000 feet above the earth. Get ’em, Gladys! Read the full story in our January 1926 issue: A Dizzy Game of Tennis. 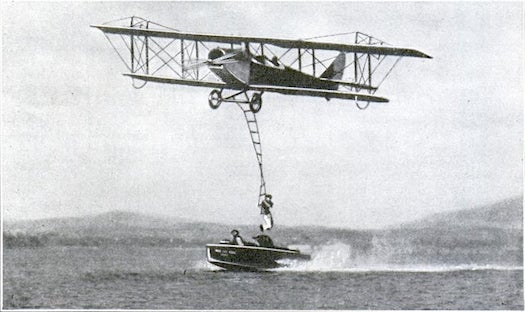 November 1924: Leaping from speedboat to plane

In this photo, stuntman Floyd Parsons is becoming the first person to jump from a speeding motorboat to a flying airplane. “While the boat was speeding nearly a mile a minute the plane came up from behind, dangling a rope ladder from its under carriage. Parsons, poised on the stern of the boat, grabbed the ladder as it passed, and climbed to the plane as it rushed through the air.” Read the full story in our November 1924 issue: From Speedboat to Plane on Swinging Ladder. 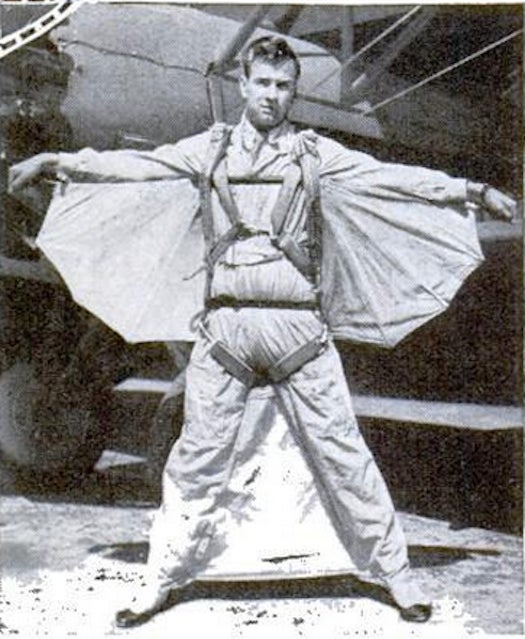 Clem Sohn jumped out of a plane 12,000 feet above Daytona Beach, Fla., with fins strapped to his arms and webbing between his legs. “The human bat glided, wheeled to the left and right, and made three loops. Then, unfurling his ‘chute at 6,000 feet, he landed safely three miles from his starting point.” His trip lasted twice as long as a normal parachute dive. Exactly four years after this article ran in PopSci, the character Batman first appeared in a comic. Coincidence? Read the full story in our May 1935 issue: Human Bat Makes a Three-Mile Glide. 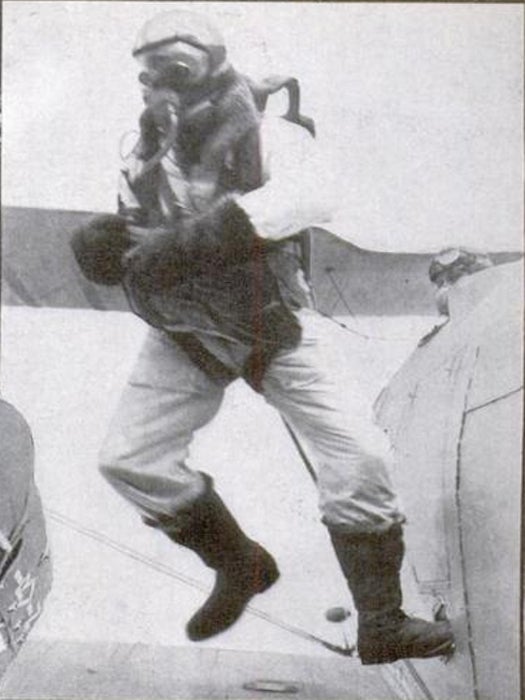 “Look at the second hand of your watch moving around the dial, until it registers one minute and twenty-five seconds – and try to imagine plunging head over heels toward the earth for that length of time!” John Tranum leaped from a plane four miles above a British airfield, hoping to set a new delayed parachute-opening record. At just 3,500 feet above the ground, he finally opened his chute and floated safely to earth (with a new, highly specialized record under his belt.) Read the full story in our August 1933 issue: Falls Three Miles With ‘Chute Closed. 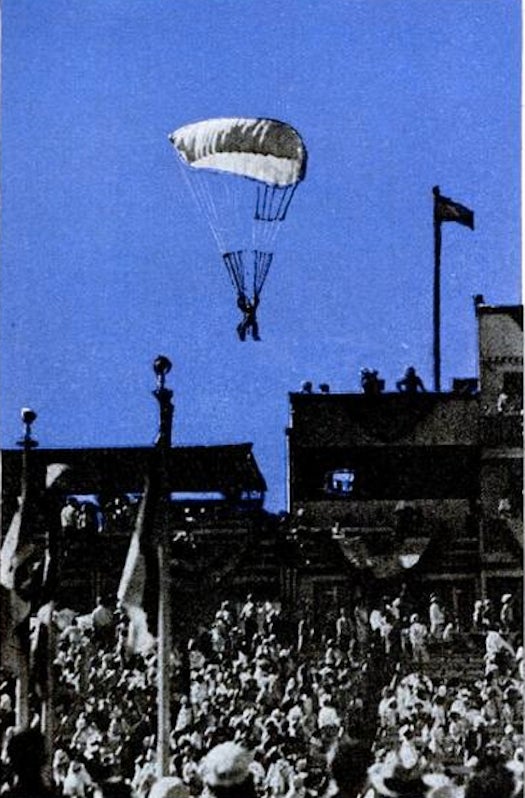 August 1938: 21-mile leap from the stratosphere

In 1938, the awesomely titled “veteran stunt balloonist” Joseph J. Dunkel was planning a parachute jump from the stratosphere. He hoped to rise 21 miles high in a balloon and then leap out to break the records for greatest height ever achieved by man and greatest speed experienced by a human. Alas, today the top Google results for Dunkel are links to an article about the time he fell off truck and was hospitalized. Sorry, Dunkel – you dreamed big. Read the full story in our August 1938 issue: 21-Mile Parachute Leap.
archives
felix baumgartner
parachute
popular science archives
Science