FYI: How Much Weight Can You Gain From Thanksgiving Dinner?

Most of the food weight and water retention disappears in time. 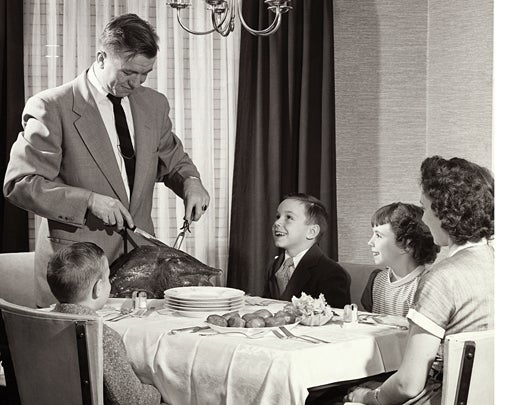 Postprandial weight gain is all a matter of timing. In the short term—I mean the very short term—any food and drink that you put into your body will make you exactly that much heavier. Eat a pound of marshmallows, and you’ll have added one pound to your mass, at least until your body starts to excrete the food or use it for energy. So until metabolic processes kick in, the amount you gain from Thanksgiving dinner depends exactly on the amount you’ve decided to stuff down your gullet.

That increase will start to wane almost as soon as it begins. The time it takes for food to pass through our digestive tracts varies widely. In general, the “colonic transit” of a meal takes between 20 and 56 hours.

Once you’ve metabolized and excreted your food and drink, how much remains in your body the next day? If you ate a very salty meal, you’ll tend to retain water, and a greater proportion of the weight will linger on your frame. But that water weight, too, will disappear, leaving you with a tiny fraction of your Thanksgiving dinner as lasting weight gain. How much depends on the energy content of the foods consumed: A calorie-packed serving of stuffing will be more fattening than a tall glass of club soda. Excess calories are converted into fat to be used for energy in the future.

Other factors, like the time of day, might also have an impact. For a study published in March, a team of Israeli scientists tested different diets on almost 200 obese adults. One group consumed a greater proportion of their calories at breakfast and lost significantly more weight, on average, than the others in the study.

But whatever your eating schedule, the net weight gain associated with any one repast, no matter how sumptuous, will be very small. Even so, says Lawrence Cheskin, director of the Johns Hopkins Weight Management Center, a series of overindulgences, however slight, can accumulate to have a significant, long-term effect. “Even a tiny excess over what your body needs has to be stored. And people do this three times a day, if not more.”

Ask Us Anything
holidays