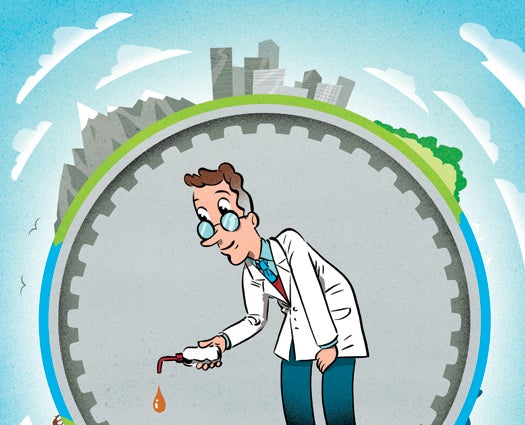 In 1964, a lubrication expert named Peter Jost gathered with his colleagues at the Institution of Mechanical Engineers in Cardiff, Wales, to discuss a vexing paradox. Factory machinery everywhere was producing more and better goods than ever before. But it was also failing at an increasing rate. The immediate problem was friction: Lubricants were breaking down, bearings were wearing out, metal components were cracking. The larger problem was that plant managers did little to reduce that friction. A little grease, a little tinkering, nothing more. Why?

Jost and the other engineers decided the managers didn’t know they needed help. Lubrication involved many disciplines—fluid dynamics, metallurgy, physics—and influenced every aspect of production, but most people overlooked it. So Jost set out to change the world’s perspective.

He invented a new name for a new discipline, tribology, from the Greek tribos, or “rubbing.” Tribologists would study “interacting surfaces in relative motion.” Jost calculated that tribologists could reduce British manufacturing costs by 515 million pounds per year.

Soon tribologists were cutting costs around the world, and today they’re involved in everything from making smoother hip socket replacements to predicting earthquakes by analyzing the stick-slip action of tectonic plates.

Managing friction saves more than money. It could even save the planet.And they’re still changing our perspective, too. Last March, tribologists at Argonne National Laboratory and the VTT Technical Research Centre of Finland found that automakers could reduce inefficiencies in vehicles by 61 percent within two decades—simply by incorporating current tribological advances in, say, lubricant additives or surface coatings.

Like Jost, they put an annual price tag on that savings: more than $700 billion worldwide. But this time, they made an even more important point: The cars would burn 102 billion fewer gallons of gas per year, producing 960 million fewer tons of carbon dioxide. Managing friction saves more than money; it saves energy. It could even save the planet.

Multiply the efficiencies tribology could bring to the auto sector by the efficiencies it could bring to aviation, or shipping, or even just washing machines. Every barrel of oil we don’t have to pump, every cubic meter of gas we don’t have to frack, is a gain for the environment. By a simple shift of perspective, then, tribologists offer the ultimate form of alternative energy: a world with less friction.