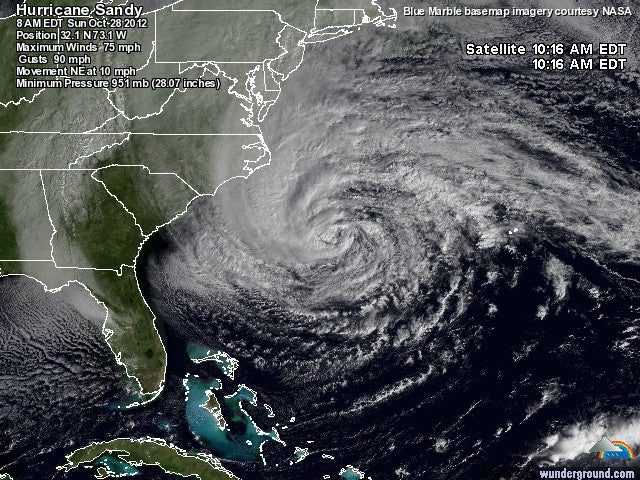 One of the most striking features of Sandy is its source of energy. Most tropical cyclones get their energy from convection of warm tropical air up through the core of the storm to the upper atmosphere, as the storm moves across the warm waters of the Atlantic or Caribbean. Most storms are at their strongest when they are out to sea over warm water and lose energy once they come ashore.

Sandy is a bit different. With a sustained windspeed of 90 miles per hour, Sandy is a Category One [see below] hurricane, but that’s deceptive. Sandy is actually getting stronger as she moves inland, thanks to something called baroclinic energy.

Baroclinity is, at its most basic, the potential energy between two fluids with different temperatures and densities. When you get that kind of mismatch, the two systems try to mix together and all that potential energy is turned into motion–in this case, wind. “The trough of low pressure that will be sucking in Sandy to the northwest towards landfall will strengthen the storm by injecting ‘baroclinic’ energy–the energy one can derive from the atmosphere when warm and cold air masses lie in close proximity to each other,” says Wunderground’s Jeff Masters. What you have right now is a jet stream hovering over the Rust Belt that is really damned cold. Sandy is warm. As the two systems interact, with the hurricane moving west over cooler water, Sandy, unlike most tropical cyclones, will intensify.

One way to track that intensification is to watch Sandy’s central pressure. On Sunday, it was 953mb. At 11 a.m. today, it had dropped to 943mb. That’s the strongest hurricane to threaten the US north of Cape Hatteras and is a typical central pressure for Category Two or Three hurricanes. You can thank the jet stream for that record. 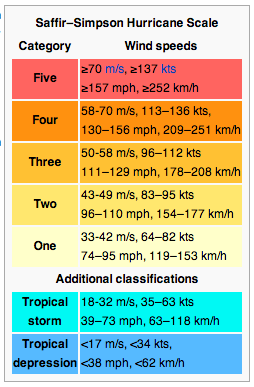 How hurricanes break down by category.
Weather
hurricane sandy
hurricanes