Archive Gallery: The Science Of Elections

A peek behind the curtain of the voting machine 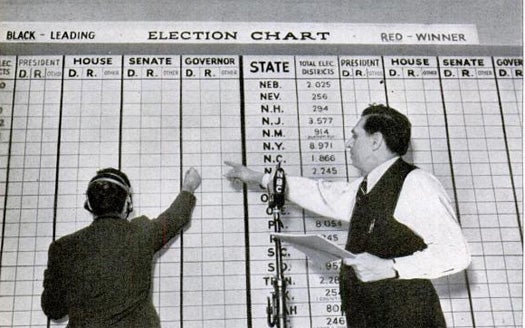 Voting is pretty simple on its face. Cast the ballots, count ’em up, tell everybody who the President is. But we who have been living through this presidential race for what seems like our entire lives know it is way more complicated than that. There are horses, bayonets, confusion about the function of a uterus and more.

Popular Science’s archives reveal that yes, it has always been this agonizing. The invention of radio brought candidates an exciting new way to get their zingers to voters. We were saved from election fraud by voting machines, but then we worried electronic voting machines might bring it back. And don’t even get us started on the electoral college. (Seriously, don’t. We didn’t write about it.)

If you’ve had quite enough of this election, maybe you’d care to lose yourself in the technology of elections past. If so, peruse the above archive gallery to get a look at the guts of a voting machine and a look behind the curtain at how votes are counted and how those polls actually work.

With the press and the public clamoring for election results, telephone companies took it upon themselves to “act as a public information bureau…each election sees them organizing a huge force of men who collect and distribute the returns to every subscriber who calls up.” Some workers compiled the statistics and some arranged them into easy-to-read bulletins, which were the projected in the operating rooms, where yet more workers were at the ready, revealing the results to any curious caller.

“Our election laws make fraud easy,” we boldly proclaimed in this 1920 endorsement of voting machines. “We Americans are prone to boast of our mechanical ingenuity and to forget that we have an election system that was old in Caesar’s time. The mere existence of the cash register and adding-machine ought to make us ashamed of our election system. The voting-machine ensures honest elections.” Voting machines, we wrote, provide the opportunity for secret ballots and keep a record of votes cast, thus helping to eliminate fraud, which used to run rampant. Election officials would hide lead under their fingernails and use it to mark ballots, changing votes, or nullifying ballots cast for a candidate they didn’t care for. What’s more, “at one time it was the practice on the East Side of New York to throw ballot-boxes into the river.” Popular Science has long been a proponent of solving problems through technology, so it makes sense that we would advocate for voting machines, though by writing “comparatively few people know that it is possible to sell their votes,” we may in fact have alerted them to that possibility, thus hurting our cause just the tiniest bit.

As PopSci astutely acknowledged in this 1924 article, “Politics is largely a matter of publicity.” Today we all glue ourselves to the set to listen to Mittens and Barry argue over binders full of women, but back in the day, getting a candidate’s message to a large audience was a little more difficult. But with the advent of radio, campaigners found themselves for the first time able to reach large swaths of the population in one fell swoop. In the 1920 election, 25,000,000 people voted, making the 10,000,000 estimated radio listeners in the country a hugely appealing demographic. “Indeed, through the magic of radio, either of this year’s candidates [Calvin Coolidge and John W. Davis], if his line is connected with such a chain of broadcasting stations, can talk through his own home or office telephone to an audience greater possibly that the total number of people who heard the voices of every presidential candidate since the time of Lincoln!” And as anyone who’s heard of “War of the Worlds” can tell you, people tend to believe what they hear on the radio.

This engaging photo essay follows all the people that make election results happen, from “Mr. and Mrs. America” on their way to vote, to the polling officials who unlock the voting machines and count the votes, to the statisticians who calculate the results, to the radio announcers who reveal them, all the way back to Mr. and Mrs. America, now seated comfortably beside their radio, eagerly awaiting the announcement of their next President. Whereas “years ago, many days would pass before positive results of a Presidential election were known,” by 1940, technological advances such as telegraphs, telephones and radios allowed the results to be reported in mere hours. But it was really the voting machines, “35,000 in twenty-two states,” that really made the difference in time possible.

We won’t even try to deny it. We love teardowns. So it only feels fitting that a look at the science of elections would include a teardown of a voting machine. In this article we look at the mechanisms that picked the President, from the lever that shuts the curtain and releases pointers for voting, to the interlocks that keep voters from answering both “Yes” and “No” to a question, to the stops and rollers that allow them only to vote for the allotted number of candidates.

“Many people trustingly accept political surveys as precise measurements as accurate as figures from the National Bureau of Standards. Others laugh them off as high class tea-leaf reading, dressed up with scientific hocus pocus.” Some things never change. According to this article, the polls are a little bit of both. We answered puzzling questions about polls such as, how can a sample of a few thousand people accurately predict the opinions of a whole country? (“Accuracy goes up sharply when the sample increases moderately”) Some of the answers were a little disheartening. For example, suggesting that people can’t be predicted like coin tosses, being more complicated than pennies, elicited the response: “There’s not as much difference as you might think.” But all in all, despite the complexities of choosing samples and all the things that might go wrong when doing so, we concluded that polls are “skillfully and honestly conducted on sound principles—and they have a fair record for accuracy.” Guess that means you can go back to obsessing over the poll numbers.

In our 1996 guide to election technology, we included a section on electronic voting paranoia, because, why not? Though the article is merely a list of resources on the possibility that counting votes electronically could result in fraud, it certainly does toy with one’s emotions, peppering in phrases like “conspiracy of the New World Order,” “time bomb” and “how computers do the devil’s work in election precincts,” only to reach the following conclusion: “[Experts] acknowledge that, as difficult as it now is to design a system that can reliably process the virtually millions of permutations possible in the ballots of some 100,000 U.S. precincts, programming a system in advance that alters a significant number of votes without leaving a trace would be even harder.” Phew. On a more lighthearted note, we also included a software that could create cartoon caricatures of the candidates (pictured here).

After the 2000 election “hung literally by a chad,” Uncle Sam was forced to put his faith in electronic voting machines, authorizing a $3.9 billion payout to improve the country’s voting infrastructure. But despite states’ initial enthusiasm to adopt the e-voting machines, it soon came to light that they were a little buggy. They lost votes and were vulnerable to security breaches. To fix this problem, machines began to employ a voter-verified paper audit trail (VVPAT), which involves machines printing paper receipts, which voters then approve in order to submit their ballot. That way, election officials still have “something tangible to count.” Another safeguarding method was subjecting the machines to tests by volunteers in order to determine anything wrong with their code.