Including Washington, Jefferson, Kennedy and more 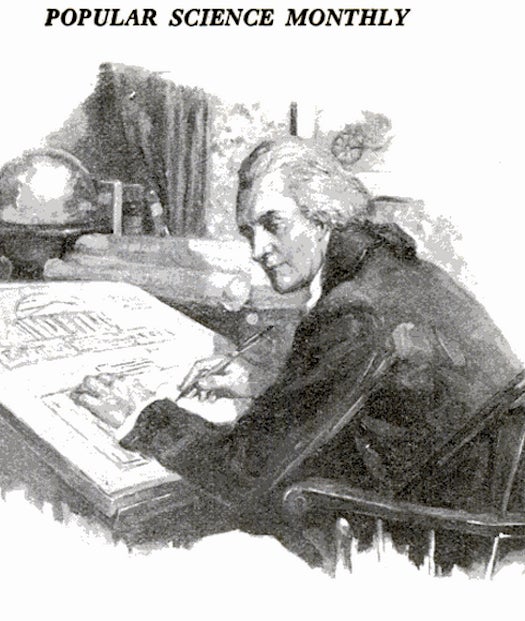 Popular Science has seen 28 presidents (Grover Cleveland twice) since its founding in 1872. Though the magazine tries to stay out of politics, there were two presidents whose contributions to science earned them our special admiration: inventor Thomas Jefferson and space-age champion John F. Kennedy.

Other commanders-in-chief, including Abraham Lincoln and George Washington, have also appeared in PopSci, but for less illustrious reasons (in 1929, we centered a whole article around Charles Hotz, a waiter who happened to look exactly like Calvin Coolidge.) Here is a gallery of our presidential coverage, from 1927 to 1989. 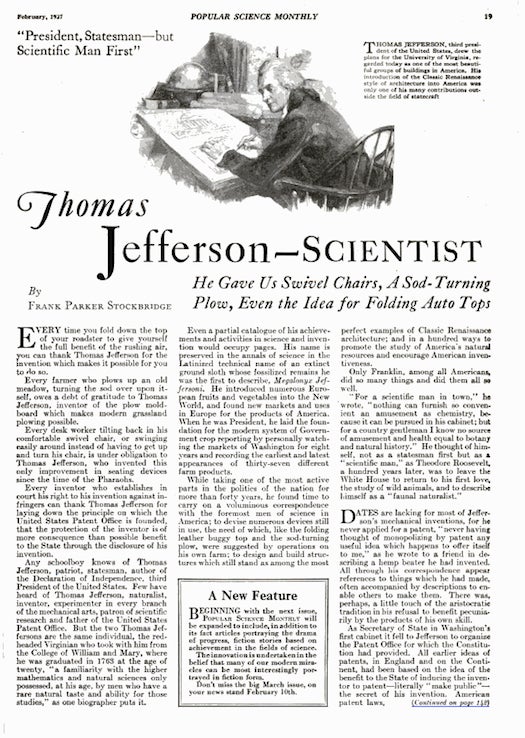 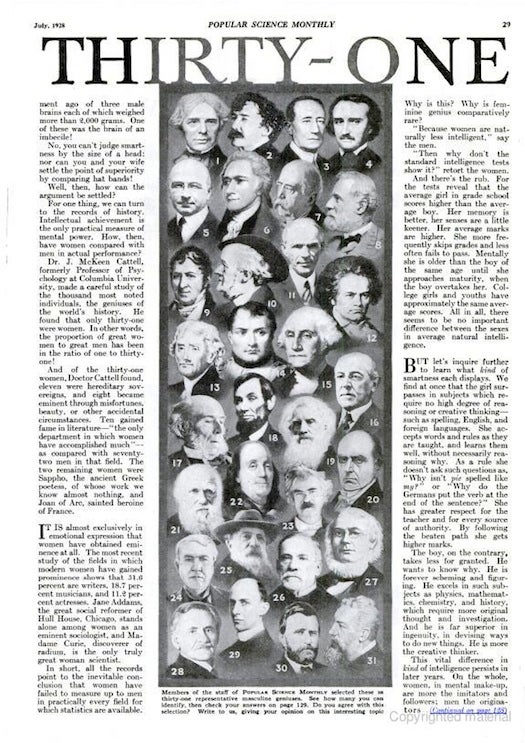 In 1928, the PopSci staff chose these 31 men (among them George Washington, Ulysses S. Grant, Abraham Lincoln, Woodrow Wilson and Thomas Jefferson) as examples of masculine genius. On the adjacent page, there is only one portrait. “The one woman genius of science – Madame Curie, discoverer of radium.” Writer Prescott Lecky argues that women, by nature, are imitators and followers, while men are originators of great ideas. As evidence, he points out that history’s important characters and leaders have almost all been men. After all, if a woman were clever enough to be president, wouldn’t she have been elected already? “In short, all the records point to the inevitable conclusion that women have failed to measure up to men in practically every field for which statistics are available.” Read the full story in Are Women As Smart As Men? 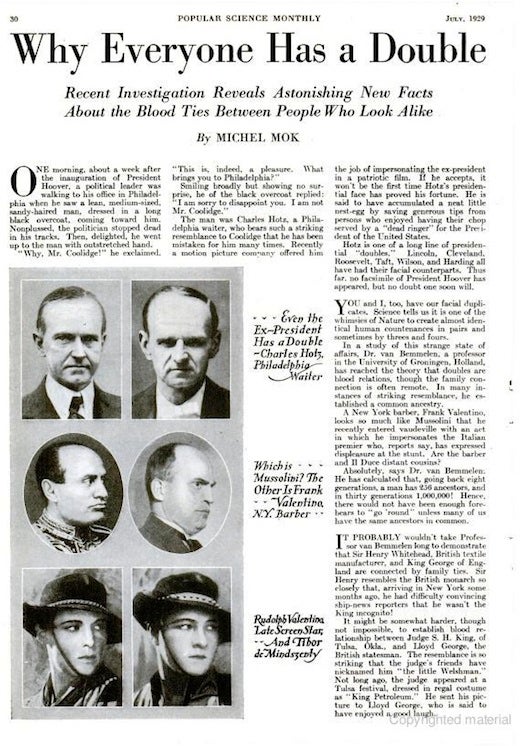 “One morning, about a week after the inauguration of President Hoover, a political leader was walking to his office in Philadelphia when he saw a lean, medium-sized, sandy-haired man, dressed in a long black overcoat, coming toward him. ‘Why, Mr. Coolidge!’ he exclaimed. Smiling broadly but showing no surprise, he of the black overcoat replied: ‘I am sorry to disappoint you. I am not Mr. Coolidge.’ ” According to 1929 PopSci article, “it is one of the whimsies of Nature to create almost identical human countenances in pairs and sometimes by threes and fours.” The man of the black overcoat above was actually Charles Hotz, a Philadelphia waiter who looked so much like Calvin Coolidge that “a motion picture company offered him the job of impersonating the ex-president in a patriotic film.” (A recent Google search suggests that gig didn’t work out.) Read the full story in Why Everyone Has a Double. 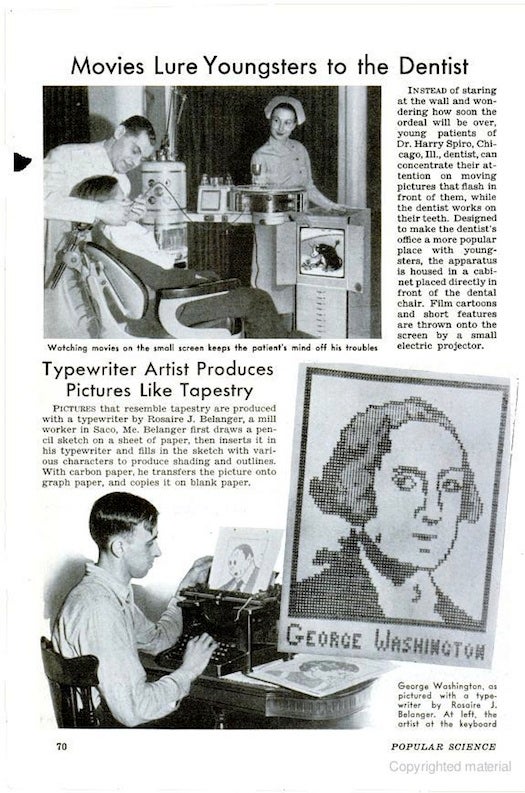 Rosaire J. Belanger created this tapestry-like portrait of America’s first president with his typewriter. The patriotic artist “first draws a pencil sketch on a sheet of paper, then inserts it in his typewriter and fills in the sketch with various characters to produce shading and outlines.” Bonus article: Creepy dentists. Read the full story in Typewriter Artist Produces Pictures Like Tapestry, 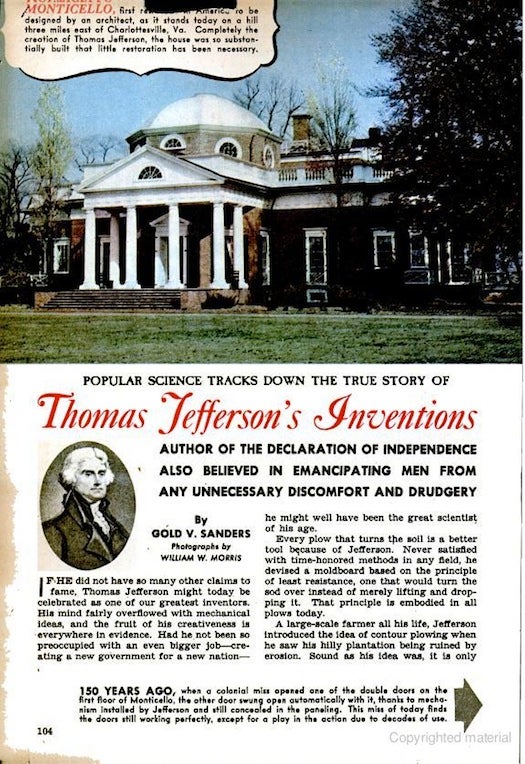 More Jefferson! In 1946, PopSci tracked down and photographed the politician’s many inventions, including an automatic door, an indoor weather vane and clock that displays both the time and the day of the week. “Had he not been so preoccupied with an even bigger job – creating a new government for a new nation – he might well have been the great scientist of his age.” Read the full story in Thomas Jefferson’s Inventions. 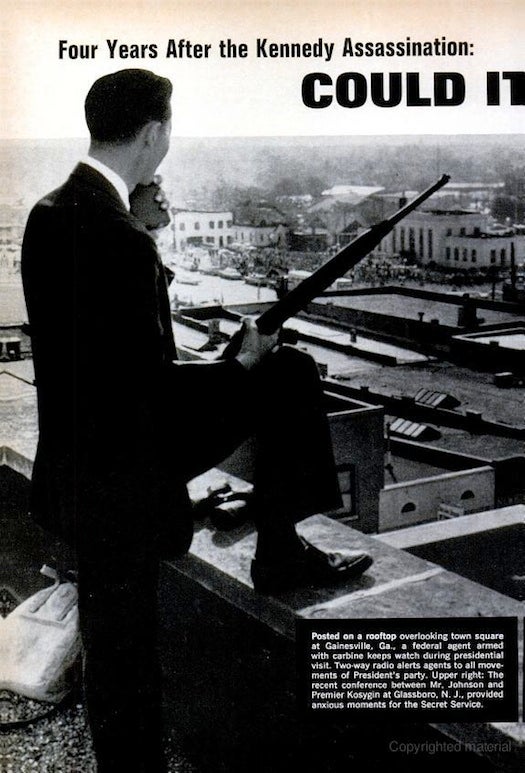 When President John F. Kennedy declared in 1961 that America would put a man on the moon by the end of the decade, he embodied the scientific optimism that has always been a core value of Popular Science. Four years after Kennedy’s assassination, PopSci wondered whether science and technology could protect future presidents. “The number of Secret Service agents has roughly doubled (to about 650), as has the annual budget (to about $17 million.) The Secret Service’s protective intelligence files on persons in various cities judged to be potential threats to the President have been computerized. Data that would normally take a week to compile are printed out electronically in less than five minutes.” Read the full story in Could It Happen Again? 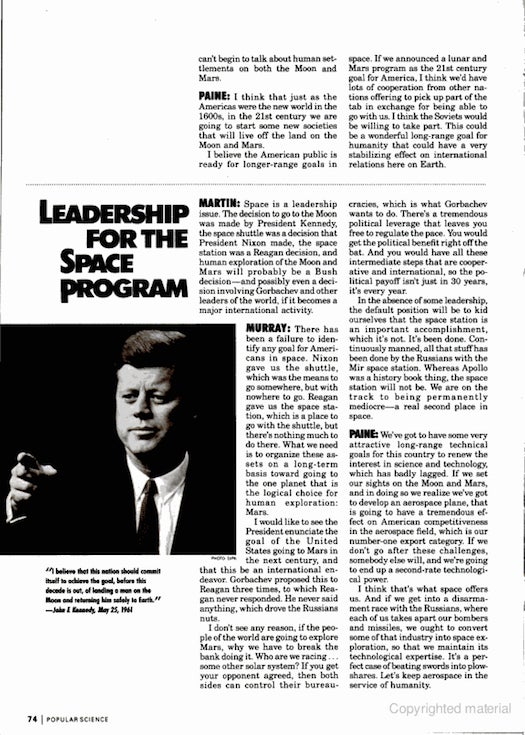 Twenty years after the Apollo moon landing and three years after the Challenger explosion, PopSci wanted to know: “Is the U.S. Lost in Space?” In this 1989 article, PopSci interviewed six experts about the future of America’s space program. One problem, according to Bruce Murray, professor of planetary science at the California Institute of Technology, was a lack of stated goals from current president George H. W. Bush. President Kennedy had the moon landing, President Nixon had the space shuttle and Reagan, the space station. “I would like to see the President enunciate the goal of the United States going to Mars in the next century,” Murray said. Read the full story in Is the U.S. Lost in Space?
Apollo
nasa
presidents
Science
sexism