Dusky sharks do not live in the Pacific waters near the Republic of Kiribati. Neither do spottail sharks, nor the... 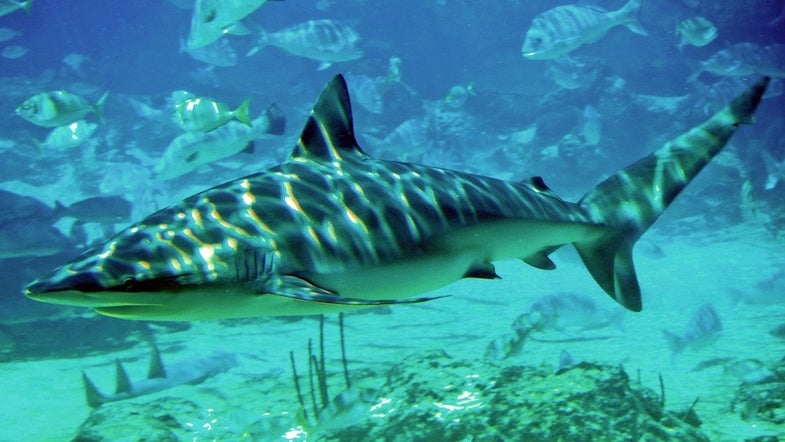 Dusky sharks do not live in the Pacific waters near the Republic of Kiribati. Neither do spottail sharks, nor the aptly named bignose sharks. But they used to live there at one point in the past — right by the Gilbert Islands, according to anthropological evidence. Ancient shark-tooth weapons can serve as a record of past biodiversity, according to new ecological research.

The sharks disappeared before biologists ever knew they were there, according to Columbia University conservation biologist Joshua Drew, who presented his findings at the Ecological Society of America’s annual meeting. Drew examined weapons from the Gilbert Islands that are owned by the Field Museum in Chicago, according to Nature.

The collection of swords, tridents and other serrated implements are made of shark teeth twined together, and some date to 120 years ago. Because biologists can identify sharks by their teeth, the weapons can prove which sharks were found in the area where the weapons were made, according to Drew.

He identified 19 distinct species, including three that are no longer found within hundreds or even thousands of miles of the Gilbert Islands. It’s unlikely that the teeth in question came from some other outpost, Nature says — there’s no archaeological or anthropological evidence of trade among the Gilbert Islanders and other people who live where those sharks are found today.

It’s not exactly clear how these sharks disappeared, but fishing and shark-finning are likely culprits, Nature reports. The weapons may not be able to shed light on those causes. But they could be a useful data bank for establishing species’ presence, if not their numbers, before modern human-related ocean changes began.